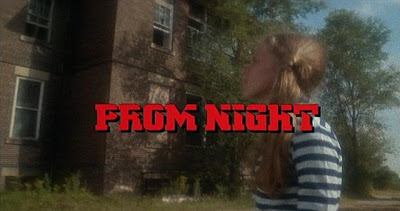 At 1974, young Robin Hammond was going home from school with her brother and sister when she saw a group of kids playing a tag-like game in an abandoned building. She leaves her siblings to join the children, only to be teased and chased to a loose window where she fell to her death by accident. Seeing what they have done, youngsters Wendy Richards, Jude Cunningham, Kelly Lynch, and Nick McBride decided to keep this among themselves and a known rapist was later blamed for Robin's death

Six years later, the four children managed to keep their pact and went on with their lives, some even befriending the remaining Hammond kids including Robin's sister Kim. And since it's prom night that evening, everybody is preoccupied in finding their perfect dates or scheming ways to humiliate rivals, unaware that the convicted rapist from long ago just recently escaped and may or may not be the obscene caller threatening the four then-youngsters of their past crime earlier that day.

As the night they should all remember becomes a night of terror, one by one they fall victim to a killer hellbent for a vengeful bloodbath.

Sided with a complementary amount of cheese, Prom Night runs a plot that took its time on building up to its premise, as well as characterize its casts before they are thrown into the carnage. Due to this, the film certainly slugs around for a good amount as we are treated to some soap drama and exploits, as well as a few mild scares and intrigues concerning possible suspects. It's a direction that works for some patient viewers, but may irk those who are eyeing for a trashy hack-a-thon with a fair mystery (these red herrings look too obvious), and too those expecting the soap drama to make a whole of sense. (Who in the right mind would befriend the siblings of the person they just killed?)

Needless to say, this is where Prom Night tends to get rocky and I understand why a lot of slasher fans stray away from this film because of this. Thankfully, once prom finally happens, the cheese becomes rather entertaining thanks to some outrageous disco dance numbers and curious set-ups, with the slasher portions finally living up the film as rules get broken (apparently virginity is not a safeguard for the killer), decent kills are delivered (the Carrie-esque prank-gone-wrong being the best), and one of the most memorable chase scene in a slasher makes it debut here. (Echoing empty hallways never looked so intense).

These scenes were pulled off in near-perfection as any cheesy 80s slasher would and I love how everything just unfolds into place straight to the climax where the killer makes a public execution against a fellow who just happen to be in the wrong place at the wrong time. I love how this film borrows elements from other slasher classics such as Black Christmas (1976) and Halloween (1978), and I definitely love how simple yet menacing the villain is despite how weak their identity was hidden for the sake of a whodunit.

While not groundbreaking in anyway, Prom Night remains one of the best slashers I've seen and an awesome 80s time capsule. Cheesy yet thrilling, disco prom never looked this fun and macabre!