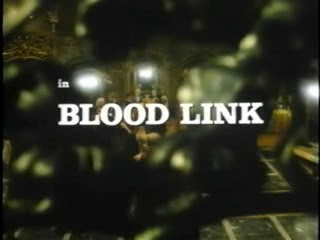 It's always believed that twins have this sort of connection between them. Clairvoyance, as some people might call it, where in one can feel or even see the things their sibling are experiencing.

This is what Blood Link dwells in most of its time, a rare slasher, exploitative in execution, about two identical Siamese Twins (both played by Michael Moriarty) separated at birth and lived lives totally in contrast from the other. One, growing up as Craig Manning, is a respected and well-loved doctor in the USA while his twin brother Keith, who supposedly died in a house fire in Cleveland at the age of 17, grew up a ruthless serial murderer in far off Germany who has an MO of stabbing his dates to death after sleeping with them. When Craig began to see visions of his brother's murder spree, he decided to track him down before he can continue to murder.

All the while, Keith's being mistaken by the people whom his twin brother had treated or known, as Craig. In order to make sure none of them would recognize his true identity, he began to kill these people, much to the attention of his brother who decides to go all the way to Hamburg and help the police there capture his psychotic sibling, under the lead of one inspector Hessinger. Will Craig get his name cleared and stop his brother? Or will Keith be free to murder in another day?

Blood Link plays its game as a thriller with slasher film elements; mainly sleaze and a sizable bodycount, since the majority of its playtime involves its plot rather than the actual stalkings. Sadly, the movie's plot never really did had that much going for it, since originality is really out of the question (didn't we already had a movies involving psychic visions and murders? Et Al "Eyes of Laura Mars" or even the obscure Fulci giallo The Psychic (1977)?), and it plays itself so straight-faced that it kinda come off as dull, cliched, not mention full of plot holes and coincidences. The kills are not very gory, but it kinda fits the tone of the movie, so I guess I can let that pass.

The movie's still engaging despite it's unoriginality, however; I do compliment Michael Moriarty's dual role as both the good and the bad twin, albeit his good character has no chemistry whatsoever between the two leading ladies that sandwiching him, much to the film's sleazy nature which could also be a good thing for some, but I can never be that shallow. To top it, they even decided to do a sleazier climax, but gutsy, I admit, involving one of the leading ladies distracting the evil twin by letting him rape her, for the cops to track him down through his brother's clairvoyance! That, and Ennio Morricone doing the movie's haunting and classy score.

In the end, we get a head-scratcher shock scare (Ala Carrie (1978)), and an ambiguity to whether all things are good or not. It's forgettable, but worth some time while you're at it.