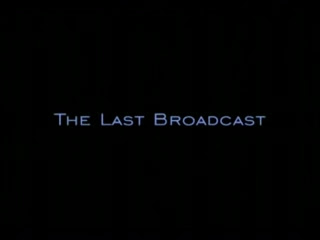 No reason at all, but I found myself watching this mockumentary hoping to see another perfect found footage slasher. Still no luck at my case, however, as The Last Broadcast is more in vein of investigative crime documentaries than an actual found footage horror, but it's no short of its own moments either.


Two producers of a failing cable show Fact Or Fiction took on the advice of a fan to do a show about the Jersey Devil. Hiking into the woods, the producers, along with a camera man and what they believed is a local psychic, went on to do their journey in search of the creature, but as morning came, only the local boy returns.

Found with the victim's blood tainted on his shirt, the boy is trialed for murder. But the question remains: did he do it?

Taking form of another documentary, The Last Broadcast is chronicled by another filmmaker investigating the case. The style of the film is actually engaging and it almost felt like a real documentary up until the twist reveal in the end. Using well-acted and authentic looking interviews, as well as news clippings, court trial videos and damaged footages from the victims' camera, it really feels like it's building to something, a revelation of sorts, and its generally effective with that, despite some amateurish feel to it. To be honest, I never heard of any "Fact or Fiction" murders in my life as a researcher, but the movie was good enough to make me believe there is one. This is a clever, interesting and well-executed idea that's easily convincing as a serious case study of an unsolved crime as well as an urban legend to pass. Perhaps that's what makes this a little more frightening than what most found footage horror can offer today, it's "real" enough to be scary.

However, the only flaw I can see from here is that it didn't focus well to what happened that night. We spent an hour and ten minutes waiting for the big reveal, or at least a conclusion, but after all that explanation, those angles and perspectives, the film strayed at the end with the abstracts of media, as well as a twist reveal that's both totally random and overly too convenient.

It's good to see at least a believable looking effort of a found footage horror, especially one that only cost about a few hundred bucks, just a little sad to see all that anticipation end with something so silly. But I'm not to complain much; I came to see a good movie and that's what I got; Good and fair mockumentary goodness.