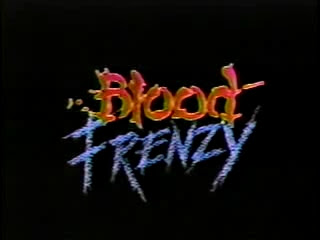 Wow, can this movie be anymore average or what? 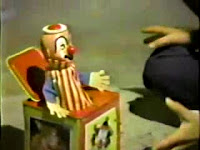 Opening with yet again another Halloween-inspired childhood prologue, a child is playing with a jack-in-a-box when his drunk father catches him with the toy and berate the kid how they can't afford junk like that. The father's about to teach the kid a lesson ala belt buckle but, being the tipsy boozeguzzler he is, pops lumbers down his feet instead and kiddie gets the upperhand by cutting his throat open with a garden hoe. Gorily. 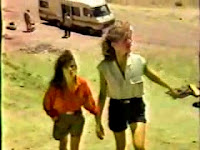 Moving something-something years later, a collective of misfits consisting of jumpy Vietnam-doomsayer Rick, "don't-touch-me" girl Jean, nymphomaniac Cassie, alcoholic doofus Crawford, alpha-male jerk Dave, and Dory, the girl with an unstable outbursts, are all taken to the hot desert by their trusted psychiatrist Dr. Barbara Shelley for a bonding experience coz as we all know, it's better to die starving in the desert working together than resolve their issues in a collective session in the loud but safe city. That or we're just running out of excuses to put these people in jeopardy just for our entertainment. 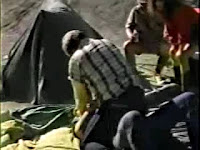 We can easily tell this is gonna be a big loss of a gamble for doc Shelley when our patients couldn't even fit themselves to work together and be open about their shortcomings, nearly killing one another in more than one occasion. So is it safe to say one of them is loco enough to kill one of them for real later that night? Damn straight, skippy! 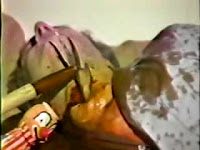 Blood Frenzy is an okay flick in terms of delivery; despite the paint-by-number cliched plotting and obvious low budget, Blood Frenzy's never boring for an unoriginal run, bringing out the blood and is pretty damn good at it albeit a tad uncreative variety-wise. It's mostly throat cuts but each were gory enough to have my approval as they looked kinda painful. (stretched latex, but who's complaining?) 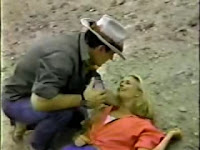 The desert settings is always a workable premise to begin with, too; the barrenness of the sands and the limited hiding spot calls for some good atmosphere, which is a strong point for the film. It somehow lost its effectiveness as it stretches messily at the near end where the remaining characters face off the killer inside a large mine as, for some reason, it ain't working much for me. Probably coz I can tell the budget all too easy by then just by looking at the cave itself, but I do like the twist thrown in. Nothing big, but they made it work somehow. 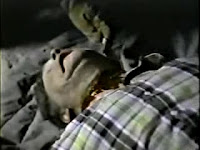 Can't say anything else but Blood Frenzy, as cheap as it'll be, more often than not qualifies as a worthy addition to slasher completists since it's budget limitations didn't hinder much in dishing out the goods. It's bad late 80s cheese, that I'm sure of, but I wouldn't mind adding a slice of it in my average viewings.