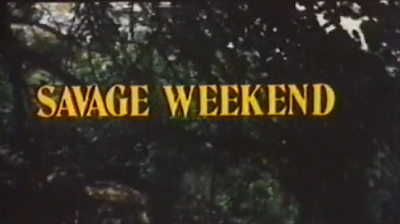 Can't say where to begin with this one. Too awfully normal to be special and hardly anything to rock my socks off. Guess I'm gonna go plain with this title and go along to what it's offering me.

It starts with a lone woman running for dear life in the woods, the buzzing of a chainsaw following along the booted feet of her stalker. An open space in the middle of the forest then gets her exposed to a grinning backwoods fella, saw at hand.

Which leads us to go back a few days earlier, into an apartment where said woman, a stock broker named Marie (Marilyn Hamlin), packs up for the weekend with her sister and friends at a little house in the woods. Now, things aren't easy for Marie in these days; not only was her husband recently released from a mental asylum, but he seems to loathe her. Of course, Marie's sexual fantasies for her hubby could say she still got a thing or two left for him, but when she starts lusting over her fellow stockbroker friend, as well as a local handyman (which was the same local in the opening), things are bound to go out of control and boy, did it ever.

Soon, a killer in a cheap Halloween mask starts to stalk the group and thin down their numbers through an assortment of weapons. Who could it be? The estranged husband fresh from the loonie bin? The stockholder who invited them to the most secluded stay of the woods? Or the notorious redneck local who's known to had branded his own wife? As it soon builds up to the opening act again, you think you know the story.

Made sometime earlier in the 70s, Savage Weekend (1979) is actually one of the fine example of slasher titles that predates itself. The last act of the film is where most of the hack'n slash elements kick in, from the stylish kills and the stereotyped victims (at least, 70s stereotypes), to the masked killer with powertools for toys, delivering us that familiar backwoods plot that have done more than it should to prove itself as a worthwhile slasher movie. But until then, the majority of Savage Weekend (1979) was on fleshing out its casts and premise, though the job is very uneven as some of the characters lacks any real interesting points to them despite starting out otherwise.

It's not that the casts done an awful job in the acting department, just that some of the roles weren't really fleshed out that well. Instead, we spent most of its first act observing the sexual frustrations of a married woman, her fetish and fantasies somehow held back by her work and family life, something that eventually coming in as relevant as does have something to do with the movie's twist reveal. 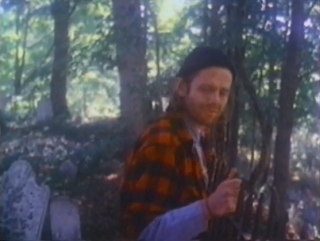 I see little duds from this movie, mainly from it's cheap-looking productions, but the film tries its best to do something different. Worth a watch if you can find it, even keep it should it fancies you. Overall, Savage Weekend is a passable slasher film with dramatics and I can't describe it any better than that.

Bodycount:
1 bat found nailed to the door
1 male strangled with rope and hanged
1 male gets a hairpin to the ear
1 female buzzsaw to the back of her head
1 male hacked with hook, thrown through window
1 male chainsawed to the back
total: 6
Posted by Kaijinu at 1:35 AM