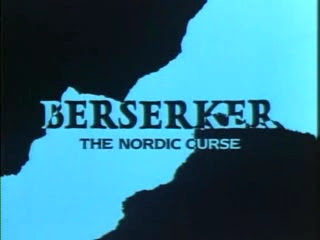 We all know the backwoods have been the primary stomping ground choice of slasher antics since Friday the 13th (1980); from the dumbest brands ever made (Camp Blood series, Don't go in the Woods...Alone! (1981)), to genuine classics (Madman (1982), The Burning (1980), Just Before Dawn (1981), etc), what made each of these titles worthy, or think they're worthy, would be the gimmicks and variations they come up with.

And this is where Berserker comes in.

Berserker: The Nordic Curse took a gag on the ole Viking legend of cannibalistic warriors who wear bear skins and snouts, cursed to live an unrestful afterlife as the royal guards of the Norse god Odin. With a good dose of imagination, these guys can be made into interesting slasher villains, but Berserker's weird editing makes it look like as if a bear's doing all the bad deeds. Maybe it is, maybe not, but in the end, I don't give much shit to what's what and just zoned out to how many missed opportunities this film has.

First of, it's generic as fuck; a group of six goes to the woods, rents a cabin, tell camp fire tales, freaked out by false scares, sex, drugs, all the usual run before things go along with the bear-snouted Viking warrior and some mean set of paws.

Now this is where the problem starts; aside the two forerunner murders involving an elderly couple (one of which is done offscreen), Berserker follows this kill count up with only two additional murders and a very prolonged stalk and walk into the fog. Normally, I would be okay with minimal bodycount from a slasher flick (ironic to say) as sometimes bodycount isn't all that so long as some good action would back it up and sadly, too much walking in the woods and too much stalking, Berserker has little "action" to offer.

At the near end, our proud Viking killer did show up to fight off a bear and lose humiliatingly against it after the big mammal dry humped his sorry arse. It's funny as it is pathetic, all that build lost to something so dull and silly, with too many survivors including a neck-gouged victim, a final girl who does nothing but hide, a nerd with a love for the Viking lore, a lucky jock who flagged down the cavalry, a sheriff and, depending on your view of the ending, even the killer himself,

Berserker, overall, has too many cravings left unanswered. Sure it may have one sex scene that's utterly hot, coinciding with the film's only brutal killing, but some missed direction and broken routine had us with barely any action going on. Berserker: The Nordic Curse is easily passable; if I want high survivor count, I rather had them throw down like The Zero Boys (1986), least they learned how to make it all worthwhile...