And Evil Shall Appear as a Schoolgirl: Eko Eko Azarak: Wizard of Darkness (1995) 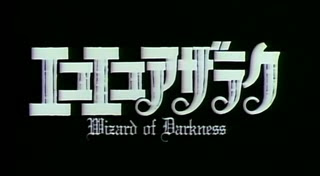 Kuroi Misa is a new transfer student of a local high school; she's stern, particularly mature, but her skills in using black magic proves to be an interest for a particular group of peers, who pressures her into cursing a teacher who's making their lives miserable.

Though it worked, a jealous classmate, who also practices black magic, accuses her of the series of strange deaths occurring all over the city when said teacher ended up dead in the next day. Said deaths, oddly, does take a particular pattern, that of a pentagram, so Kuroi  may have a hard time convincing anyone that her magic is not to blame. Things goes for the worse when she, along with these students, ends up mysteriously locked in one night, ending up either being murdered or killed in bizarre and overly brutal manner by someone behind a cloak and hiding in a candle lit room.

Eventually, Kuroi  learns that might be the something more diabolical than a mere massacre; something that, if completed, might bring forth a force too powerful to apprehend and defeat.

Wizard of Darkness is one of those overlooked slasher-hybrids thanks to obscure franchising that went into an entirely different tone; while being the first of five movies and a basis for a TV series, Wizard of Darkness is the only one in the series that had a slasher film over tone. Although it did try to do something entirely different with its plot by including dabs of the occult and a possible apocalyptic end to our world, the first half's sheer focus on murdering these students one at a time is all the familiarity we need to recognize a bodycount film, left alone the fact that some of the usual slasher clichés are present. This will include a variation of the sex=death formula (done here in exploit featuring a lesbian student-teacher affair), teens doing stupid decision that ends up with them dead, and multiple plot twist and red herrings to keep the killer's, or killers', identity a mystery.

The occult theme here was played side-by-side on the killings, and even more around the first few acts. Although some of it is pretty straightforward, I do enjoy how this culture tries to take a stab on classic juju that involves a lot of devil worship and voodoo dolls. Kinda cheesy, but does go well with the movie's simple yet sort of gritty beginnings.

In terms of budget, the film definitely shows how little is used, but otherwise it befits the overall tone of the film; The single setting fair quite well for the massacre, and some good camera work had us sweeping through the empty corridors with ghostly visage and a bit of gloomy atmosphere. The murders are creatively simple yet bloody enough to satisfy fans of dead teenager films, but some of the supernatural elements of the film are played down until the last act which involves an arrival of a powerful deity. Around this act, the use of cheap CG did come off rather distracting but thankfully this only lasted for a few moments, thus only a minor drawback.

Other flaws I see here is that the victims being slaughtered here are not that developed; as most of the focus was on Kuroi, the rest are literally disposable characters made to pump up the kill count as they panic and scream at something they cannot understand. Yes, they're scared, and this would be a common reaction anyone would have if everybody else seems to be dying off in impossible accidents, but I really do wish they did more than be mere victims. Still, the lead heroine is pretty far out; she's serious, but not the kind that's too hardened so it makes her at least relatable.

In conclusion, Wizard of Darkness is one obscure title that's a must-check for slasher fans; if you think Japan's first standard slasher Evil Dead Trap was strange enough to satisfy your bodycounting urges, wait til' you see this one.