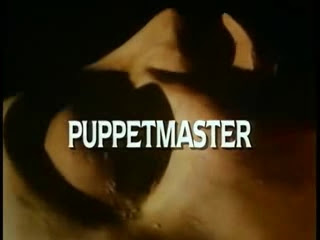 A genuine cult classic, Puppet Master is a direct-to-video production that puts the name Charles Band into the map when it comes to genre flicks. While this isn't is first foray into the living inaminate horror business as he also acted as one of the producers for the genuinely creepy supernatural slasher Tourist Trap (1979) and the horror-fantasy Dolls (1987), the imaginative variety of the tiny terrors in Puppet Master made way to its success not only as a movie, but also as a franchise that has its ups and downs through out the years. Personally? It's my love for slashers and my still-burning passion for toys and collectibles that made this an instant fave for me, so let's settle in and see what strings this movie pulled.
Puppet Master starts in 1939, with an elderly puppeteer named Andre Toulon working on a puppet's head at the Bodega Bay inn while a small figure actively scouts the building. Through the figure's eyes, we see trouble as a pair of Nazi spies soon drive to the bay and started to making their way to the puppeteer, prompting our small scout to rush and beat them to it, warning Toulon, its apparent master. The man, however, calmly hides his beloved creations within the walls of his room before shooting himself dead, keeping everything he knows to the grave.

Fifty years later, psychics Alex Whitaker, Dana Hadley, Frank Forrester and Carissa Stamford are contacted by an old colleague named Neil Gallagher, inviting them to the old Bodega Bay inn where he claims to have found Toulon's secret in giving life to his puppets. Despite some mysterious and fairly disturbing visions of death and gore (A few of them being their own demise, mind you), the physics made it to the inn only to meet not Neil, but rather his estranged wife Megan who they all never heard of until now.

As it turns out, their colleague killed himself after sending out the message (A death so recent that his body is still there in a conveniently placed coffin!) and they believe they're gathered to further investigate Neil's findings. Unknown to them, unfortunately, is that some of Toulon's beloved puppets are out for blood. Could they be guarding their master's secrets? Or is there something foul afoot?
Admittedly, the small budget of $400,000 often shows as Puppet Master can be dialogue heavy and slow paced until the last twenty minutes but direction-wise, the film does its very best as a creepy and bloody horror flick. The story can get a tad too ambitious with its topic of magic, alchemy and psychics, but the writing, stylized visuals and editing made enough of the material to work as a B-grade cult movie, a matter that can be satisfyingly enough for the right audience.

As an addition to the killer toy sub-genre, the puppet effects, though dated and sometimes obvious (are those the shadows of the puppeteers I see?), are great and their gimmicky designs are wonderfully creative, distinguishing and memorable enough to admire, a few of them being popular enough to be recognizable within the horror community: Blade is an apparent leader, wielding a hook and a knife for hands as he slashes down victims four times his size. Pinhead is a brawn that grapples with crushing fist. Tunneler is a literal drill sergeant armed with a working buzz-top to hole through flesh. Leech Woman has a macabre skill of vomiting live leeches. And Jester, perhaps the tamest of the bunch, can shift his expression with an uncanny sneer.

They're definitely the stars of the movie, something that may or may not say much in regards to our human actors, a cast of unknowns who still, up to this day, remain unknowns. Quite a shame, really, as I think they all did well on their roles and carried the film as good as their puppet co-stars. Granted some of them did get cheesy and their characters can be ridiculous at times (again, if you saw visions of your own death, why proceed?!) but these kinds of travesties are to be expected in low-budget horror flicks so a very little that needs little addressing.
T&A is present as half of the cast are supposedly sexually charged characters, though it is quite surprisingly that these nude scenes were barely erotic or graphic. In fact, gore is relatively lite as well as most of the kills were done in a way they're either cut away the moment steel comes in contact to flesh, or, strangest of it all, green goo replaces blood during the movie's messiest slaughter. It's prim and prudish for a slasher flick, yes, but it somewhat fits the tone and mystic air of the movie so it is, again, hardly a problem. (I mean, the opening theme of the film is already an indication that we'll be dwelling in dark fantasy)

Despite having the common flaws of a budget-restricted production for its time, Puppet Master lives on as one of the more enjoyable killer toy horror films and one of the longest running horror/fantasy franchise, with twelve movies following up after this (including a non-canonical crossover between another Charles Band production, Demonic Toys (1992)) and perhaps more to come. The success of this movie and its film series definitely owes a lot from its featured tiny terrors' grimly charm and I am glad to say I gave this movie a try and a keep. So if you're yet to see Toulon's magnificent creations, then this way come! This is one puppet show you shouldn't miss, dear bodycounter!