Roth? What ever happened to...? 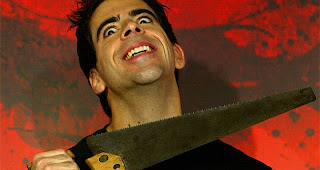 Recently, I just saw the new Eli Roth produced Survival/Disaster film Aftershock. Let me be the first to say, it wasn't as i imagined it; originally, I pictured a group of people surviving an earthquake, but finds themselves trapped inside a collapsed building, and is forced to go through a tunnel to get out, but only to fall prey to escaped convicts who found their way through the same tunnels and began to kill them one by one ala slasher film. (My idea. Don't steal it!) I didn't get none of that, and instead, I got people dying left and right from accidents caused by an earthquake and it's aftershocks, escaped criminals who's dumb enough to stick around looting people when a Tsunami warning is already being called out, and some other paranoid fucks.
Not a bad film, but not and style.

So now, I began to wonder of some of Roth's projects that we would be seeing in the near (and not so near) future; all them promised little bad numbers that should be. Here are those titles I've been looking forward from him;

So far he promised two slasher film titles: one would be a feature length version of his Grindhouse fake trailer Thanksgiving, who he claims to be the first hack and slash film to tackle the holiday (apparently, he hadn't seen Blood Rage (1987) or Home,Sweet Home (1981)...), the other would be an exploited, bodycount friendly re-imagining of the classic killer kid movie The Bad Seed. I'm most excited about these two, knowing what kind of gory goodness Roth is capable of, more to add is the fact that Thanksgiving is supposed to be released this year, but it seems The Bad Seed might be close to being a dead project. I refuse to accept that, we need more memorable female psychos out there!
Other flicks I'm waiting for would be his produced feature length adaptation of a fake trailer jokingly associated with him known as Clown, about a man who can't get a clown suit off after wearing it for his son's birthday, and finds himself slowly changing into a homicidal clown. I thought it was funny that Roth would actually try to make some fan boy's dream come true by producing it, but I'm equally excited to see this one due to my love of killer clowns. (Apparently the monstrous type, not the humanoid killer kind. Eitherways, it works) The film is labeled in IMDB as undergoing post-production, so I guess that's two other movies I'll be seeing from Roth this year?

Lastly, I'm also in the look out for his The Green Inferno, which sounds like a stab at the Cannibal Boom movies from 70s Italy. For me, these cannibal movies are all the same (Save Cannibal Holocaust and Cannibal Ferox, them are my favorites!), so I'm not all that hyped about this, but I'm still seeing it if I had the chance. Who knows, it might be good. Hopefully. Maybe. Ugh.
I'm a fan of Roth as you can tell, so you can forgive me for this little random post focusing on his releases, but after seeing Aftershock, I just wanted to share to you guys my thoughts on these upcoming films that seems to suit my interest. So, until then, I'll be on the look out for these films, and probably waste my time watching Doctor Who and cartoon ponies for the mean time.

(P.S. No, you can't have that little movie idea i posted there. That's my dream movie! Talk to me first and we can discuss on how you can pay me with apple pie for this movie...