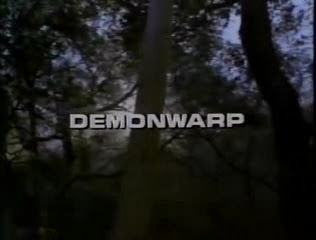 Penned by the director of the cult horror film Troll (1986), Demonwarp starts with a pastor in the 1880s horse-riding in the mountain ranges while reading aloud passages from his handy-dandy Bible. A ripple in the sky catches his attention, which just so happens to be an alien ship crash landing, seeing this as a sign of the Second Coming. Following the trail of the ship, padre pulls out his cross and approachs it.

Fast forwarding to the present, we now follow George Kennedy as Bill Crafton, a father whose idea of family bonding includes playing board games with his teen daughter inside a rented cabin located deep into the woods. Unbeknownst to him, this father-daughter time will suddenly get interrupted by a large Bigfoot-like creature breaking in, knocking him out cold and mauling his girl to death. Once Bill comes through, he swears vengeance over the big ape.

Cue in weeks later after the Bigfoot attack, five kids driving to the woods for some R&R with one of them appearing to have another agenda for being there, as they happen to be the nephew of a missing local and they're egging to find out what happened to him. The kids eventually make it to their cabin only to find it trashed and bumps in to Bill, now in full "hunting gear" and still setting his sights on killing the monster that attacked him and his daughter. Obviously, our killer cryptid is still out there and he's more than glad to slaughter anybody that gets in the way.

But is there more to the big guy's rampage? Like why is he hoarding up electrical parts from his attacks? Or why are there non-flesh eating zombies roaming around in the woods? And what happened to that kooky padre from the beginning? (He's not really important, but I just wanna know) All this answered in the near end in one twist to another, leading to a climax that ultimately placed this film under one of my new guilty pleasures!

Seeing all the strange monster mish-mash this movie tries to squeeze in, my initial reaction to Demonwarp is that it is a bit of a mess but giving a bit of consideration, I do admit that it at least attempted to make something different out of the classic backwoods slasher sub-genre, all in good heart but with half a brain.

The first half ticks off every slasher cliches in the book, from bad pranks and gratuitous nude scenes, to ignored doomsayers and stalk-kill chase scenes. It wasn't long before our killer cryptid is out there murdering anyone it can grab on to with much killer monster action as that other "Bigfoot slasher" Night of the Demon, minus that movie's extreme gore and with a lesser kill count. I guess the only thing that bothers me here is that the most of the main casts got killed off too soon (or is missing) within the span of 30 minutes, so the writers had a pair of random teen bimbos and one unlucky bird watcher thrown in serving very little purpose but to pad the film a little longer with cheap chase scenes (that seems to take forever) and upping the death toll to at least something more slasher film worthy. (It kinda worked)

When these three random victims finally get done away, Demonwarp shifts its focus back to our hapless backwoods vacationers (and George kennedy) at around the last third act and that's where all sorts of crazy plot twists and elements begins to show their ugly rears. As if the technology hoarding killer ape wasn't strange enough, we suddenly have undead henchmen, blood cults and the near forgotten alien space craft finally thrown into the fondue, resulting to the cheapest yet one of the most bizarre turn for any slasher movie made out there, making you wonder what really went through the writer's head during pre-production!

Considering the production value itself, the Demonwarp has a lot to be desired in regards to, well, everything from acting, special effects, filming set and even camera work. The monster suits were hardly expressive, the gore effects were lite save for a head being torn off and one guy being gutted with a dead branch (!), plus the story is inevitably laughable. But as a trashy, cheese movie that doesn't do much other than be a backwoods slasher that you can poke fun at while drinking a keg of beer, it'll probably hit you right! I find it ill to recommend this movie to anyone, so I'm just going to say should what you just read here sparked one shred of interest in that noggin of yours, rent the movie and see the garbage can-fresh cheese that is Demonwarp yourself!