Some Ugly Zombie in a Backwoods of Nowhere: Twisted Nightmare (1987) 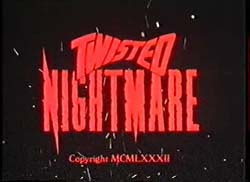 Didn't we already went through this one already? It sortah felt like we did. Like seeing an entire decade of everything we know about a slasher film vaccum-packed into one tedious and uninspired movie. And how uninspired is this you ask? Well, let's go through the movie's plot then, shall we?

Here we have a group of stereotyped teenage campers (like any backwoods slashers) who decided to take a weekend break on a cabin in the woods, only to be warned off by an Native American groundskeeper of evil things. In turns, some of these kids were here in these very woods before some time ago, when a mentally challenged brother of one of the girls, after being teased around, winds up burned alive by an unknown force, but no body was found!

Turns out that the camp was built atop an ancient Indian burial ground, and an evil force had chosen said autistic to be its vessel of death or something. Some campers go missing while other campers have sex or buy supplies, and then said other campers return and took their time to realize that some of their friends are missing. (but are really dead) Some of them braves to go into the woods to look for the others, most of them, however, gets killed by zombified monster that growls like that grizzly bear from the movie Grizzly (1976). Routinely, the remaining teens tries to fight and survive, cue twist here, more last minute slasher movie antics there. The end.
﻿﻿﻿ 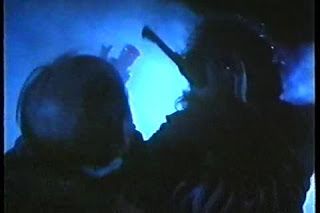 With that two paragraphs alone, I already saw Friday the 13th, The Burning, Madman, Superstition, and Scalps/Ghostdance as some of the many "influences" of this movie; so if you're a complete slasher film completist like myself, you don't need to a rocket scientist to know what will happen in one scene to the next. As I mentioned, its really nothing more than every slasher film made in the 80s done with an incredibly amount of sloppy cheese, lifelessly bad scripting, awful editing (which ends up with the movie running -sorry, crawling- at a sluggish pace) and extremely cheap special effects. It's done by the book, yes, and slasher fans would always appreciate that, but with so much elements in one movie and directed so ineptly, it lacked something that would set it apart and instead ends up with something completely pointless in terms of existing.

In fact, why was this even made if we can rent any backwoods and/or Angry Native slasher films out there and experience the same (or better) blood works that this film offers? It's old hat, that's what it is, even for a slasher film. The kills, the epitome of said horror-subgenre, aren't even worth the penny they're spent on since they're done away already, thus barely making up with all the flaws this film have! If it's anything, the only thing worth pointing out positively about this movie is that the barn used in the film was the same barn Jason got hanged, dismembered a biker and gets his head split with an axe in Friday the 13th Part 3D! So...yay?

Nay, this is definitely lowest one would scrape in a barrel looking for a good movie. Hardcore collectors would still want it, and too, those who values this for nostalgic reason, but if you're completely masochistic or high on something (or on a lot of things), then feel free to choke on Twisted Nightmare and I wish you a good life.