The Mad Chopper of Camp Stonewater: The Burning (1981) 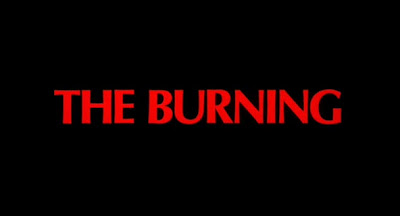 Premiering just after the release of a certain backwoods slasher classic, Friday the 13th, The Burning has the unfortunate luck of often being dismissed as a rip-off of said slasher classic when in truth, it's far from one. Yes it's a camping ground slasher that has teens being cut down to bite-size pieces, but if it's anything, The Burning pretty much can stand on its own two feet and deliver us a brutal, if not slow-paced, cult favorite!

We kick-start the film with another prank gone wrong; the kids of Camp Blackfoot decided to play a nasty scare on a cruel groundskeeper named Cropsey, by placing a rotting skull with lit candles inside next to him as a surprise. The thing is he was surprised alright, enough for him to panic and knock it into his bed, engulfing him in flames. Ole' Cropsey got burned to the extreme (a fucking "Big Mac" overdone as one uncaring orderly had described it), hospitalized for the next five years and vows vengeance against all Summer campers as soon as he's released.

We then focus our attention to another camp, Camp Stonewater, where everybody seems to be just right. Seriously, this has to be one of the more realistic looking camp sites out there with interestingly developed campers and counselors, who are just isn't out there for the sex. After a prank or two, the following day have a group of these happy campers canoe their way to the wild wilderness for an old fashioned campout under the stars, around a bonfire, and telling each other spooky stories. One particular story is none other than the tale of our burnt groundskeeper Cropsey, whose evilness has now fallen into urban legend territory.

But as any campfire tales in a slasher film would have it, the legend is far from just a story and everyone will find that out soon enough through the sharpened edge of a garden shear.

The Burning is one of Bob and Harvey Weinstein's (Miramax's founders) first initial production, and one of the two titles that was supposed to be based on the urban legend Cropsey, a killer janitor of summer camps who was known to be big news around small towns with missing children. (The other movie being the cheesefest Madman (1982)) In comparison, The Burning is more of a straight forwarded horror film with bits and pieces of Porkies style teen comedy. It's cheesy at times but the dread and overall nihilistic feel of the film certainly proves The Burning as one of the finer examples of a well-deserved cult classic.

As you can tell above, a lot of the cliches grounded by movies like Friday the 13th and Prom Night were present and twisted a bit for the sake of originality. Some of them worked, as this film has set one of the first examples of a final boy and odd thing about this is that it not only features one, but two men brawling against the killer in the finale. There was actually a pair of sympathetic girls here who could have faced off our monster, but one of them got killed off while the other survives, helping the rest of the campers get back to the camp. (It's nice to see little traumatized tykes saved, sometimes) In fact, this is a trait about The Burning that I came to appreciate as their characters are not your average random meat that's gonna be cut up; the film certainly took its time to build around the summer camp parts that you could actually see them enjoy themselves and feel a bit nostalgic; this is what makes Cropsey's murderous rampage shocking and terrifying as he's not just killing random teens but likable individuals who we really wanted to see survive.

Tom Savini is responsible for a lot of make-up and gore effects here and I'm really astounded on the level of violence he cooked up. A lot of scissor kills, ranging widely from disembowelment, skull splits and finger dismemberment (yuck) but thanks to a hectic schedule, the killer's own disfigurements looked less realistic and resembles more of the poor man-monster from The Incredible Melting Man (1977). I wouldn't mind the killer's make-up actually, Cropsey's scary enough on his own and intimidating with his black cloak, ferocious violence and eerie silence. Another technical aspect of the film I came to enjoy was Rick Wakeman's awesome score for the movie; it's very retro-sounding but at the same time very dreading!

The only flaw I can see here was that the last act could have been more exciting; there's some padding made to build up the suspense but the last fight wasn't as thrilling as the tension build it up to be. Still, this is a very small chip in a wooden chair for my part, the film can still stand on its own even with that little flaw.

Very intense, moody, and all the brutal shocks and gore is patient enough to strike at the right moments; The Burning might just be another slasher film, but the direction and the production values of this film is well spent and creative enough to entertain. Clearly, there isn't any other slasher movie out there well deserving of their cult status.