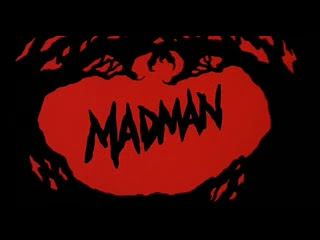 The head counsellor sings the tale of one grunting monster known as Madman Marz, a farmer so vile he felt no pain when an angry woodchuck bit off a part of his nose. He abused his family to the point of madness, snapping one night for no apparent reason and starts hacking them all dead with an axe before going downtown for a drink of cold beer. Of course, the townsfolk quickly realize he'd gone completely bonkers, so they lynched him, hanged him on a noose and hacked his face with an axe. As daybreak, however, the hanging body of what they believed to be a dead man was nowhere to be found, thus the legend of Madman Marz begun.

Now, it is said that when one would say Marz's name above a whisper, he will come to hunt you down, but teen camper Jimmy thought otherwise and pulled a loud one before hurling a rock at the alleged Marz house. It isn't long before Jimmy notices a shadow clenched on top of the trees, watching them as they're about to head back to the cabins, so he decided to risk it and stick around to find out whether it's really Marz he saw. By the time this little camper was finally noticed missing, one counselor heads back to the woods to look for him, only to fall victim to the legendary killer himself. Soon, it's one counselor murdered to the next, and everyone will know that Marz is indeed real!

In backwoods slasher standards, Madman is an okay 80s production that's relatively simple in its approach, though I cannot deny the fact that this over-cooked cheese has its glaringly obvious weaknesses.

For one, the dialogue of the movie is really, pun intended, campy and I find some of the acting questionable. One scene here, for example, had a guy apparently being folded on his back and he sounded like somebody doing a bad voiceover, to the point his screams sounded kinda practiced and hilarious. The plot is also noticeably repetitive for a decent round, as it cycles through counselors going into the woods to look for their missing comrades one by one, only to be killed by a psycho with an axe and starting the loop all over. Nothing very original or complicated here, but at least all the cards are played right, cheeky and cheesy cliches aside.

What Madman lacked in original ideas, it makes up for it with a lot of atmosphere; the blue-tinted lightning adds much to the effect of the night's coldness and much of the camera tricks used have us vaguely seeing our killer, reducing him to nothing but a looming shadow in overalls. The gore in this movie is also noteworthy as we got bloody tidings of throat cuts, axe decapitations and one funny looking beheading via car hood.

Notable in this title as well is the lack of teenage camp counselors, with a bunch of late 20s to early 30 somethings taking their place which is fitting as these are the kind of people you would think be responsible to handling little youngsters. The camp itself is also more authentic to look at than what most other slasher-in-camp movies have, probably cuz it has actual children in them. (Something Friday the 13th learned by the time Jason Lives again in 1986)

May it be an underrated gem for many or an average slasher for some, Madman has enough cheese, jolts and blood to charm and worm its way to any other fan's hearts, particularly aficionados of backwood loonies and camp counselors in danger. There's definitely an hour and a half worth of entertainment to be found from this title, given that one will give it a chance, or find a right time to indulge in nothing but classic cheese and sing along with the Madman Marz song!

Bodycount:
1 female hacked to death with axe
1 boy hacked with axe
1 girl hacked on the head with axe
1 male clawed on the throat
1 male hanged on noose, neck forcingly broken
1 male decapitated with axe
1 female had her head crushed off on car hood
1 male hoisted and had his back broken
1 female axed on the chest
1 female impaled through hook
Total: 10
Posted by Kaijinu at 10:11 AM