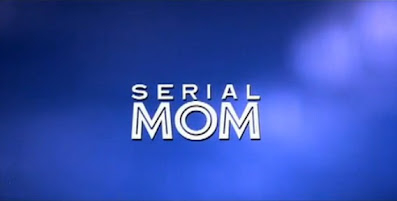 It wasn't until I saw Seed of Chucky that I knew about John Waters; he had the best death in that film and, after finding out he guest starred in one of my fave Simpson episodes (The one about Homer's homophobia), I began to dive in deeper to Mr. Water's works and, curious enough, I half-like what I found.

Though I was chipper about that fact he made two of my fave musicals (Hairspray and Cry Baby), I wasn't too thrilled about his other works (I tried watching Pink Flamingo. Let's just say I wasn't turned on at all...) Still, that didn't stop me from seeing this one black-comic/satirical look into the serial killer-loving side of America, where we follow one suburban housewife's everyday life of passionate gardening, coupon cutting, household cleaning, kitchen wares, obscene prank calling and, of course, serial killing!

Meet Beverly Stuphin (Kathleen Turner), the loving wife of a local dentist (Sam Waterston) and mother of two misfit children, Misty (Ricki Lake) and Chip (Matthew Lillard). She enjoys spending her past time plotting murders against neighbors and strangers alike for the smallest crimes and mistakes, such as not recycling, scolding someone for loving a certain genre of films, and even for wearing white shoes after Labor Day. As she continues to secretly murder anyone that irate her, hapless witnesses begin to pile up, as well as her family and neighbors becoming more and more suspicious of her odd, cheerful-as-day personality. After publicly murdering one victim during a live stage show in front of a crowd, Beverly gets arrested and so the trial begins.

Around the last act, Serial Mom switches from a slasher movie to a head-on black comedy that pretty much shows how much everyone loves a sensationalized serial killer. Beverly's family exploits their mother's homicidal run, producers crowd and beg for movie rights, and young fans praise her every appearance. Will she be punished for her crimes? Or will Beverly find a way to win the hearts of millions and pardon her of her own crimes? Well, if she will, she ain't gonna do it kissing everyone's ass. Nah, she'll be fanning her legs like there's no tomorrow!﻿

Unsettlingly funny and gruesomely bloody, Serial Mom's a good look into our morbid fascination as horror fans to serial killers as the film just doesn't focus on a horror fan's point of view but also the media's, satirizing the infamous showcasing of monsters like Mason or the Son of Sam killer through exploitative films and documentaries over the years.

What makes Serial Mom an enjoyable film is that it's just plain crazy. The mood of the story is never serious, plus Kathleen Turner's performance as a serial killing 50s-style mother provides enough laughs as a ridiculous character who just so happens to be blessed with extreme luck and/or personality. The script, though not perfect, is chuckle worthy for those with a very dark sense of humor (Something most viewers seems to forget when watching this movie, sadly. I mean, this IS a John Water's movie!) and too those who could get the references. (there was a lot of 50s references here) Performances from the rest of the cast are okay; nothing big but acceptable otherwise, even if I was surprised to see Matthew Lillard in this. Funny to think he'll be starring in another horror film-satire two years later, Wes Craven's Scream!

Since the first half of the film is your typical slasher film walk-through, I was glad enough that the film got the gore count really working. We're talking about organs getting sticky on an impaled fire poker, hit-and-run-overs, and the ever popular bludgeoning by lamb leg! (Alfred Hitchcock's Presents, anyone?) It's nice to see someone getting creative with their kills once in a while, keeping a straight psycho face even!

The film has a lot to say to a lot of things; the consequences of deprived housewives with no real life outside their homes, and too, again, our interests in sensationalized media featuring whatever's hot, no matter if it's of good or bad taste. These are among the little commentaries being made here but for those who would like to just relax and laugh at something so shallow and dark, Serial Mom's a great film to rent for a weekend's viewing. Not everyone's movie, but at least try to see it once and, who knows, you might learn that the creepy phone caller you keep getting every night might be closer than you think...

Bodycount:
1 male hit with car, run over
1 male ran through the back with fire poker
1 female stabbed on the gut with scissors
1 male gets a dropped air conditioner toppling on top of him
1 female bludgeoned to death with lamb leg
1 male torched with a lighter and a can of aerosol
1 female beaten to death with payphone
Total: 7 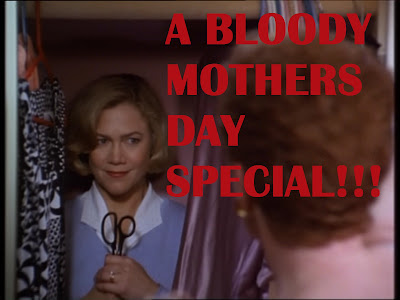