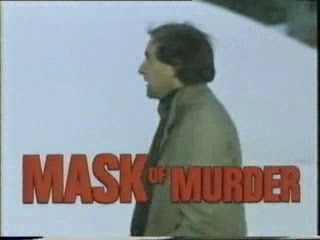 In a small town in Canada, someone with a white mask has been cutting up girls' throats with a straight razor. The suspect? A vagrant looking man who's now hiding in an old cabin up in the snowy woods.
After a tip on the location, the fuzz soon swarmed the place, including Christopher Lee as Chief Supt. Jonathan Rich and Rob Taylor as Supt. Bob McLaine. When Rich was wounded after trying to negotiate with the killer, Bob retaliates by shooting the killer repeatedly with an automatic rifle; the killer was assumed dead and the nightmare's over. Or so they think.

Some time later after The Slasher was pumped up with enough lead to turn him into a pencil, another series of razor murders began to swarm the small town. Is the killer really dead? Or are they dealing with a copycat killer? Suspicious red herrings then began popping up, but which one of them could it be...?

Honestly, you can guess who the new killer is by the time the film hits the 20/30 minute mark, but for the sake of those who are eyeing to see this (understandably) rare slasher movie, I won't spoil it. But for all honesty, the mystery of who's responsible to this new wave of razor murders is a real dud because of this, but the film still tries to confuse us by providing us some red herrings along the way. I wasn't confused, and presumably half or more of those who'd seen this film wasn't as well, so why bother? Perhaps it's desperation or ineptness, but Mask of Murder is one of the most cheapest and easiest flick to come around in a dual country production.

The gore's absent and reduced to icky throat cuts that looks like a red food color being painted on with a plastic razor, very little T&A and any attempts to create a suspenseful scene is killed by the honky soundtrack. The film's only selling point is it features some screen veterans such as Christopher Lee, but with very little screen time on his part, it's hardly worth the trouble.

If rarity is all we're looking for, then this one certainly took the cake; whether it's distribution problems or that the negative response to this movie was really that overwhelming that everybody just pretended this film doesn't exist, it's scarcity is a Godsend, and anybody who's able to get a copy of this film are doomed fools. Apparently, I'm half a fool since I only downloaded this film (hence the German subtitles you see in the screenshots), so thankfully, I could just delete it and avoid running into it again like a fat guy eating a hotdog right next to a fireplace. Least I won't have the burden of owning it...