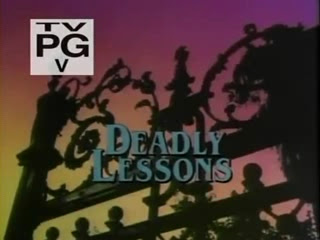 Needing to improve her French, young Stephanie enrolls to Starkwater's Girl's Boarding School for the summer and there, she befriends those who warmly welcome her, as well as meet the not-so-friendly ones who point and criticize her old-fashioned dress codes. She also meets Miss Wade, the school headmistress who strictly instructs Stephanie not to go around mingling with the townsfolk or the boys at the neighboring school.

The next morning however, as Stephanie and her new friends take a good morning's swim before class begins, they find the school's top bully floating face down. Everyone dismisses this as an accident though detectives suspect that it might be the doing of a lover from the neighboring school or even a staff from their very own campus. Things definitely isn't what they seem when another girl turns up strangled, as staffs, students and authorities are left to wonder who's behind these deaths.

There's definitely a lot missing from this movie; as a slasher, it lacks what most of its kin made themselves worthy such as blood, guts and at least a higher bodycount but seeing his is a TV movie, I guess there are reasons for the tameness of the flick. So despite some obvious slasher film influence around the second half up until the end, Deadly Lessons is more of a soap opera thriller film with the sensibilities of a Nancy Drew story.

On that behalf, Deadly Lessons is a definite watch thanks to its clever writing and great build-up to the mystery. Around the first act, the film is running with classic red herring suspects such the creepy caretaker, the head mistress with a secret, and the good guy stable boy who's too good to be true. There's suspense and intrigue, enough to keep you guessing on who the killer might be despite the lack of slashing and kill count per se, and too a good five minute run at the near end between the gloved killer and our heroine as they engage in a game of cat-and-mouse before the big reveal.

Nothing hardcore but a fun time waster if I must say; Deadly Lessons is a film that you can enjoy in a rainy Sunday afternoon, coozied up in a big chair with a nice hot cup of coffee or chocolate. See if you can spot the future voice of Bart Simpson, Nancy Cartwright or Larry Wilcox from Chips while you're at it.