The Italian Chainsaw Massacre in the Left: The Last House in the Woods (2006) 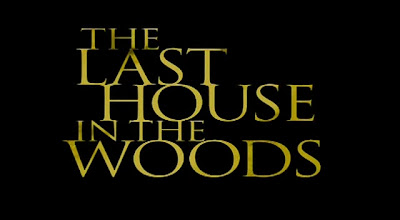 Can the lack of imagination be easily make up with just good gore?  Well, on a personal note, gore's not enough to make a movie great if it doesn't go along with a good story, but for this case, I can make an exception since the brains behind this title was at least honest enough to admit their movie's obvious influences.

The Last House in the Woods is a hodge-podge hybrid of two movies, Wes Craven's The Last House in the Left and Tobe Hooper's Texas Chainsaw Massacre. We start the film with a family swerving their car into a tree, killing the father and leaving mum and son to venture out to the other side of the woods to find help. Mum gets hit by an incoming van and son hides into the woods, watching the van's driver brutally kill off his mum with a rock.

We then fast-forward some amount of time later, wherein we join a bickering couple riding into the woods in hope of mending their relationship. But after their car breaks down in the middle of the road, they soon become the prey for a trio of drugged up punks who proceed to beat and rape them. But rescue comes in the form of a gun-packing stranger driving by and scaring off the druggies; taking pity on them, the driver lets the couple rest up in his secluded home in the middle of the woods, where they are patched up by the driver's wife. But as you would know in any horror movie, the backwoods-dwelling husband and wide aren't what they seem, especially if they're taking care of a sharp-toothed boy with something that isn't red jello smeared on his face. Soon, the two young couple is forced to become dinner for their hosts' inbred family and an unexpected help will be their only hope of surviving if they live long enough.

The Last House In The Woods is a throwback to the old Italian exploitations of the 70s and 80s, where plot is ripped-off from (better) movies and cheese is the selling point. As an intended rip-off of Last House on the Left and Texas Chainsaw Massacre, the movie tries to re-capture those years of Italian cash-ins but it hardly tries anything to set itself apart from the rest.

The movie did nearly everything Last House and Chainsaw have already done, including some shocks and promised gore, but there just wasn't enough to throw around to make it anywhere that exciting or intense. It's imaginative and nasty with its grue (Wanna see a man die from an exploding goiter? Look no further!) but the tone of the film can be an issue as the comedic elements comes rather off, border-lining as hammy.

The last act is probably this film's another high brow moment; while the first act is a routine walk-through with gore, inbred horror and lots of running, the second half is where we have our thugs come back to save the two couples (or what's left of them), which was an odd direction that does nothing but boost up the kill count as people from both sides die off from one bloody murder to the next. There's also a disturbing image at the end that kinda unnerved me, a bit of a shout-out to the weird and surreal endings Italian horror is known for.

A guilty pleasure for sure, The Last House on the Woods is a cocktail of everything you would know and expect in an Italian exploit, with a little something extra around, may that be a good or a bad thing. It's not gonna hold-up to the rest, nor was it planning to reinvent the face of horror, but it's plays the game pretty straight up, entertaining us with buckets of blood and a retro look that's done in a budget similar of those from the old days.

Bodycount:
1 male killed in car crash
1 female hit by a car, brained to death with rock
1 male beaten to death with a gun
1 male disemboweled with chainsaw
1 male shot on the head
1 male knifed repeatedly on the back
1 male had his neck crushed until goiter explodes, bled to death
1 male knifed on the back, nearly beheaded
1 female had her  neck repeatedly bitten
1 male had limbs cut off with chainsaw, bled to death
Total: 10
Posted by Kaijinu at 4:41 PM