A Maniacal Mechanic's Manic Massacre: No One Lives (2013) 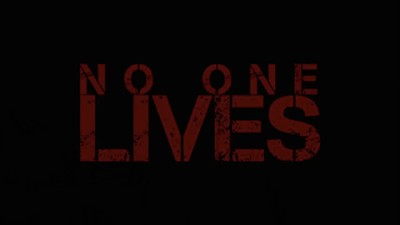 The 2013 released slasher film No One Lives, directed by Ryuhei Kitamura of the Midnight Meat Train (2008) and Versus (2000) fame, sets our expectation with promises of a cool kill-a-thon by a guy with fancy gadgets, but it all ultimately falls to a let down for me as there's barely anything memorable about this film, to be frank.

It starts with a blonde running in terror at night from unseen foe only to be captured by whatever's hunting her down and not killed for a change. We then suddenly shift to daylight as we follow a couple on a road trip presumably to patch-up a broken relationship and a gang of house thieves with a member who's cray-cray about killing, demonstrating this soon enough by gunning down an entire family who owns a house they're currently raiding. The couple and the thieves cross paths later at a local diner, soon resulting with the gang harassing and kidnapping the pair.

Now as the film's trailer suggests, this couple isn't what they seem to be, more precisely the guy Luke Evans plays here who is simply credited as "Driver". The thieves eventually discover a captive girl inside his car and he turns out to be a serial killer armed to the teeth. Things further take an interesting turn for the thugs when they find out there's a reward money worth millions for the captive girl's whereabouts, but with the Driver out there with plans of eliminating everyone who stands in his way, surviving this bloody night is getting harder by the minute.

For a film that revealed the twist way before the film even gets released (through the trailer and Mr. Kitamura's interview), you would expect the production to at least work out better on other departments that'll makes this slasher film fun such as gore, script and atmosphere, but none of these apparently crossed their minds. It's quickly paced around the first act, yes, but after the twist is revealed and the MIA blondie begins rambling on what our slasher can do, No One Lives starts to lag from one part to the next so evenly that you have to wonder where this film is really going, or if it even understands anything at all since a lot of the characters seem to have a thing for speaking in whispers. A lot of characters.

Furthermore, I don't really understand how a couple of bad guys work as effective slasher victims? The way I see it, it could only work in two ways: they could either be the biggest sonovabitches deserving of their fates (like the ones in Tormented (2009), where its lead of bullies get killed), or they get develop into those who are willing to side with the victims, settle their differences and just try to live through the night. (Like the ones from Scarecrows (1988), which were originally armed thugs only to start looking out for their hostage once the supernatural scarecrows attack) The victim set here are house thieves with one trigger-happy douche that everyone seems to hate but kept around coz only he has the teeth to fire a gun willy-nilly or some shit like that; they're not that threatening or developed so more or less they're merely victims, just like the rest of the meat these kind of films have been cutting up for years now.

The killer, while indeed has his badass moments with his impressive hand-to-hand combat skills and the fancy toys that would make even a one of Jigsaw's apprentice from the SAW series jealous, is still kinda underwhelming since his gimmick isn't entirely fresh: aside from SAW, we also have The Collector and its sequel doing the gadget-killing a work, and too the acclaimed "Home Alone for Horror Fans" The Aggression Scale (2012). Even if it's still in the hype then, No One Lives' kills aren't gonna match-up with the murders the other Saw rip-offs were doing either if the killer committing them is a smug crossover between Jason Voorhees and Jigsaw with little or no interesting characterization, save for the million philosophical spattings of why he is different from common criminals. I will admit, though, that the murders were at least splashing enough red stuff to keep the gorehounds seated on their seats, even it really feels like as if these guys are holding back on the grue. I could try to be that shallow but sometimes I really need more than blood and guts to make the movie I'm watching work. Even if its a slasher film.

No One Lives certainly lacks a real fire power to make itself that worthy of a watch, but I ain't stopping you guys from seeing it. As I mentioned, if blood and flesh shredding and splattering are your thing, then this film at least provides. But lemme just go ahead and say you would probably forget about this film after a day or two...