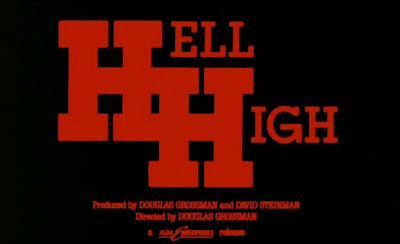 With slasher films losing their flavor in the late 80s thanks to re-hashed plotlines and cheesy sequels to never-ending franchises, many titles decided to go through a few tweaks or two in regards to their stories. William Lustig combined action film elements with slasher film horror with Maniac Cop (1988), Scott Spiegel have gore and simplicity at their best in his Intruder (1989) (or as I prefer to call it, "Night Crew: The Final Checkout"), and one-time director and producer Douglas Grossman decided to change the usual stalk-and-prey pattern of a basic slasher film and mix up the exploitative world of 70s rape-and-revenge flicks in his otherwise overlooked Hell High.

Opening sometime 18 years ago, little miss Brooke was playing with her dolls in a wooden shack when a teen greaser and his girlfriend crash in to make love. As Brooke hides away to evade being caught, she decides to get even with the punks after she sees the greaser rip her doll apart, throwing a bucket of mud at them as they drive away in their bike. However, this little plan for revenge swirls off to deadlier ends when the mud blinds the driver and ends up catapulting and impaling the teens through some metal spikes.

Fast forward to 1989, Brookes Storm (Maureen Mooney) grows up into a Biology teacher currently harassed by class punk Dickens (Christopher Stryker) and his crew, which she retaliates by slapping him in front of the class, enraging him to threaten her before leaving to force ex-football jock Jon-Jon (Christopher Cousins) to their group.

Jon-Jon, you see, wanted out of the games but gets labeled as a coward for doing so. This, though reluctant at first, prompts him to join Dicken's crew, which consists of late 80s/pre 90s fashion disaster Queenie (Millie Prezioso) and a food stuffing Smiler (Jason Brill). Together, they rigged a football game Jon-Jon was supposed to be in with a prank (No loss for that part. Their school was losing anyway) and they soon plans to play another nasty joke on Ms. Storm later that night. However, what they didn't know is that Storm's breaking point was already at peak and what they'll do next has dire -and fatal- consequences.

Hearing about this film way before I had the opportunity to watch it, I was kinda aware that Hell High may not exactly follow the formula we all know and love, but I wasn't expecting it to be anything as sleazy and impressive as it is. For starters, I like the fact that the film tries to elevate us from the single dimensional characters these sorts of horror films cliched to death, building around the personalities of each hooligan and at some point seeing the situation from their point of view. However, the problem from this approach was that none of the characters are all that sympathetic; Dicken's is that kind of sociopath that you would really like to leave him in a ditch to die. He's a real nasty fucker who cares very little of his enemies and/or his friends. His two accomplices are nothing more than just drones who follow him around and be as nasty as he is cuz it gives them power. Jon-Jon, who should have been a more rootable guy, ends up being pushed around and barely tries to take control of the situation (no matter how much he tries), thus his label as a "coward" is quite befitting. None of these kids have once thought that what they're doing is fucked up and all of them selfishly think about what would come after once they're caught blamed for their assaults, so I was more than free to feel nothing but hate against any of them with gutso.

Interesting, however, same can also be said to our killer teacher; I can understand she'll be acting this way if she kept that traumatic childhood event to herself in all these years, but who and how on Earth did Ms. Storm ended up with a teaching job being that jumpy of what she did many moons ago? This plot hole aside, Ms. Storm's overly introvert and nervous personality makes her real hard to root for, given that she barely socializes and is hardly friendly, so by the time she breaks down and becomes our resident boogeywoman, we're caught in this conflict of whether we should fear her because she has completely lost it in more ways than what she already did to begin with, or cheer for her since she's giving these kids what they deserved.

In Storm's defense, however, she does make a worthwhile killing spree mainly involving brutal, if not overly detailed kills; bashed heads, fire poker impalements, and one memorable pencil kill are some of the punishments awaiting these troublemakers. Not exactly gory for that matter, but otherwise bloody enough to satisfy. (Although, personally, I think Dickens deserved a slower death than what he had here. I want to see him beg and cry! )

On the technical aspect, Hell High boasts some good camera works and a chilling atmosphere. The ending's a real downer, but the chilling effect of it lasts for a while and that's something I find really impressive from an overlooked, late 80s slasher such as this. You never expected it'll go down that road from the jokey, prank-filled first act it has.

While not be every slasher fan's cup of tea, Hell High was a good effort to try something new for the sub-genre. While it could use a higher bodycount and a more morally inclined hero for us to at least care for, the psychological attack on both the characters and on us was enough for this little sleeper to earn a look into.

Bodycount:
1 male and 1 female impaled on pikes
1 female beaten on the head with rock
1 male stabbed on the temple with pencil
1 male impaled on fire poker
1 female throat cut with kitchen knife
Total: 6 ﻿﻿