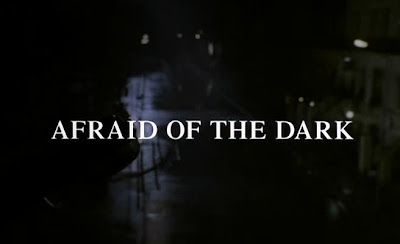 Though not overly impressed, I do have to admit that this is one of the more captivating and engaging thriller films I've seen in my life.

Afraid of the Dark is a drama showcasing the anxiety of a young boy named Lucas, who's slowly going blind through two separate parts; the first is shown through the point of view of the boy himself, as he imagined almost everyone from the entire world (or at least those living in his neighborhood) is blind and that a serial slasher has been harassing blind women. Lucas soon comes to witness one of the attacks and tries to keep it to himself but when suspicious men begin showing up everywhere, he has no choice but to try to survive and protect those around him.

This half is the reason why I'm reviewing this film here; this first 45 minutes is pretty much a movie of its own, reminiscent of the early 70s gialli films that played more on the mystery rather than the growing bodycount as many of its later kin had done. There's a slasher, yes, but all he did is literally slash up women and none of them are actually killed. The odd thing about this half is that it has an ending; the killer is finally discovered by Lucas and apparently beaten, but just when we thought it's finally over, we're suddenly shifted to the second half of our tale.

In here, every character that appeared before are the opposite of what they were from the first half; the blind can see and supposed friends are actually close blood relatives, but Lucas is still going blind and his anxiety to the fact he's losing his sight begin to take its toll and it pushes him into his own dark delusions. Adding pressure to his already confused and frightened state is the arrival of his newborn sister, something that may have ultimately descended him into madness. This half is very draining and emotive as the confusion and frightened state of the boy really seeps into this act; it's not perfect and a lot of viewers may not understand this but I would like to see this film as one of those made for the "thinking man".

Afraid of the Dark is far from your usual horror film as it is marketed; it's deeper and more cerebral, getting into your skin and makes you feel for the lead character, splendidly played by young Ben Keyworth. Both halves of the film are equally intense and unsettling, thanks to a rather bizarre direction of the first and the wholesomely sophisticated and symbolic turn of the second; the overall net result is a thriller more intelligent as it is, prompting the audience to debate to what the film is really about and the meaning behind all the images. (Such as the money shot featuring Lucas taping a knitting needle dangerously close to his coke-bottle glasses)

It's not for everyone, especially those who were expecting a slay-a-thon of blind women and slashers stalking-preying a child hero (as I did), but if you're feeling the need of a strange yet supposedly intelligent film to test your brain cells, try this one for the time being and tell us how do you feel about knitting needles by the time the movie ends.