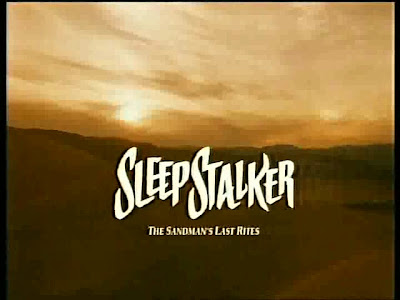 I remember seeing snippets of this film as a kid and wanted to see the rest of it some years later but all I had to tail with was that particular scene involving a kid, with his mouth sewn shut, stabbing his father to death. There was that one time I got a chance to see this film once more on cable but it was halfway into the whole thing and I never even got a chance to finish, since it's a school night.

It wasn't until I was a working adult when one of my colleagues mentioned this as one of scariest film she'd seen. I was gleeful enough to ask her for the title and next thing you know, I was streaming this. Now, I finally get to see this childhood nightmare at its fullest and liking it!

Griffin Davis is the lone survivor of a childhood massacre where a deranged maniac who calls himself The Sandman slaughtered his parents. Fortunately for Griffin, the cops were already tailing him that night and, albeit too late to save his parents, the feds finally captured The Sandman before he could kill him off.

Now seventeen years passed and The Sandman awaits execution, but an ally came to aid him, promising power to help him complete his task; at death, The Sandman found a way to merge his soul with the desert sand, reviving him as a supernatural killer with power and control over the earthly particles. Now seemingly indestructible, he set his sights to kill off the only survivor of his last massacre, along with those who are literally on the way.

Technically, Sleepstalker is a good movie as while it may look like another A Nightmare on Elm Street rip-off on paper considering we have yet another one-liner spewing supernatural killer here, what sets him aside is that he at least have some creep factor going for him, which helped the film quite a lot.

The Sandman's persona is rather calm, singing lullabies and talking in a very estranged verbal slur, looking extremely deadpan yet obviously bewildered all the time, making him very unpredictable and goddamn creepy. As a supernatural killer, his powers to control sand with much focus on his goal kinda makes him a good variant of a horror film monster, although I can't help but feel that his film held a lot of things back that would have made him do more than just burn people's flesh off with sand and seep through locked doors.

Due to the film's minimal spending money, Sleepstalker also has a cast full of unknowns with varying degree of workable acting and god-awful cheap CG that is thankfully used very little. Scripting wasn't entirely bad truthfully, with the two main casts working a decent act for their roles; Jay Underwood was great as our lead Griffin, a sortah blue-collar guy that we working class can identify with even if his situation would verge into something more fantastic than realistic. Michael Harris as The Sandman, as you can tell above, is just awesome. There's also Michael D. Roberts as the mysterious blind preacher, whose presence in the movie is as intriguing as it could get, and a small role from Ken Foree as one of the detectives might elevate some experience. The rest of the cast are so-so, leaving quite a small thread to hang into when it comes to the acting department

A real headscratcher here would be the inconsistent plot twists: the movie's climax revealed (spoiler alert) that The Sandman and Griffin are related by blood. This is quite hard to follow and it's obviously a cheap shot to make something out of the story and the killer's MO, but even that hardly made any sense! I won't spoil a lot but trust me when I say it's best not to take a lot of things coming from this movie seriously. In fact, considering this is a film about a man coming back from the grave via sand ala Freddy Krueger in Part 4: Dream Master, to seek revenge, how can you?

Admittedly clichéd and cheap, Sleepstalker is still a hoot of fun as a midnight movie. There's some neat elements thrown in from Mexican gangsters to Satanism, plus the backstory behind The Sandman is creepy enough to unnerve a bit. (As you can tell how it lead me to track the entire movie down after all these years) Gore effects are slightly creative, focusing less on blood and guts, more on dust storms that burns your flesh away and fatal glass shard weapons. Make-up effects on the killer himself is plain badass, especially at the near end when he acquires one -and deadly- body modification.

It's understandably overlooked, but once in awhile, it makes a good TV viewing when you're able to catch it. Sleepstalker is simply something you can watch without thinking much from all that's happening, just as some movies should be.