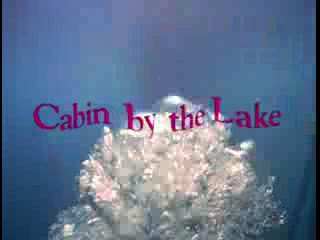 Sort of low-key as a slasher flick but otherwise a decently smooth ride for a made-for-TV flick, Cabin By The Lake puts the tameness into a more acceptable level with a rather simple story that draws us into the life of a serial killer with a job.

Stanley Caldwell is our resident scriptwriter, working alone on a slasher flick at the titular cabin by the lake. He's taking his time to do proper research to make this movie as effectively grueling as possible, much to the annoyance of his agent but, the truth be told, his so-called "research" is more of hands-on calculated murders wherein he enacts his story's killings on kidnapped girls and study their reactions, right before he tends their bodies underwater in his own personal "garden".

The disappearances go mostly unnoticed in a small nearby town and, soon, another local girl named Mallory gets captured and nearly weighed down into the waters, only to be rescued by a group of film aficionados testing a dive cam.

Seeing Mallory is the only survivor of the crime, the local cops concocted a plan with the film group that saved her to create a life-sized replica with a spy-cam hidden in one of the eyes, hoping to capture who the killer is. This sadly fails and Mallory is soon captured again while cops and friends alike try their best to put the pieces together and find out who's behind the drownings.

Not the most gruesome the sub-genre has to offer, the film still is an entertaining watch for a TV flick since it did provide a lot of interesting elements to keep the story far from being a dragging wreck.

The murders are visibly bloodless, but relatively inventive and distressing, committed by a bewildered and sophisticated villain portrayed by Judd Nelson (whom some of you may remember as the phone book-jotting killer in Relentless (1989)), whose sole reason for his psychosis is written out along his own screenplay, a twisted take mixing crime confession and artistic smugness. He has a streak for women that boils deep inside of him, ironically offing them for the sole reason that he finds them "more beautiful dead than alive" which makes Nelson's character and the film entirely workably creepy.

It has its slow parts, purposely focusing on Caldwell and those who he interacts with, along to the few who survived their encounters with him. Thankfully, this is well-written despite suffering from cheap clichés on amateur snooping and the self-satire started by the outbreak of 90s teen slashers. A worthwhile watch if you're up to something different for your dead teenager films apart from a higher bodycount and more misogynistic messes. 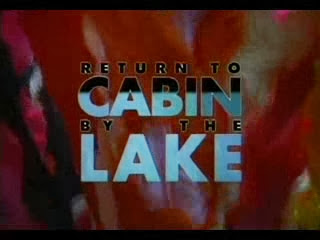 A surprising follow-up, Return to Cabin by The Lake continues the story of one Stanley Caldwell, a screenwriter-slash-serial killer who faked his own death the last time around he got too close on being captured.

Now learning to disguise himself with cheap wigs and glue-on facial hair, Caldwell sets his eyes on directing his own films this time after a few "pep talk" with one of his agents. (and soon, victim) Invading the set of a movie based on his own story, he murders his way to a directorial debut, but also finds himself in a predicament where his true identity is at risk of being exposed by relatives of past victims and even some of his own casts. In typical Caldwell fashion, he nonchalantly fixes these problems one by one, may it be through simple manipulation, or simply murder.

If the first Cabin tamed itself down with bloodless kills, Return sets itself lower with three measly killings (though admittedly more varying compared to the first film's) and a more comic tone. This leaves the film in a state wherein it cannot decide whether it wants to be a horror film or a TV thriller with a cheap production quality, more often at times showing us more of Nelson's character in an attempt to show his screenplay the way he wanted it to be without exposing his true identity to those he wanted alive.

The casts are relatively fun in a cheesy, semi-clichéd way, again taking stabs on cheap slasher film productions and to how often we want our villains to be vile. A bit of a running gag is that Caldwell kept restraining the original director's exploited version of his killings, turning down every known horror/slasher tropes such as abused childhoods and sex=death debauchery. Obviously, he doesn't like anybody butchering his story, so he butchers those responsible for the first act, but the last act definitely walks away from routine, instead strolling slowly through casts, crews and justice-seeking victims becoming suspicious of their new director's off-put behavior.

Almost a drag, but thankfully has Nelson showcase an interesting serial killer with a now more personal mission to keep it from sinking any lower. Not for everybody's taste, but I find it a worthwhile TV time-waster.

Bodycount:
1 female tied to a potted rose vine and weighed down into a lake, drowned
1 male shredded through boat propeller
1 male buried alive in a coffin
Total: 3
Posted by Kaijinu at 10:55 AM