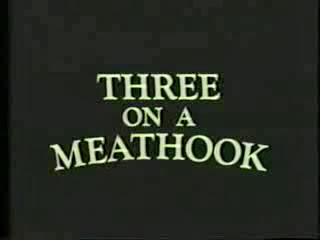 While not as bad I thought it would be, director William Girdler's proto-slasher Three on a Meathook certainly needs to be a lot more than just another twisty story of exploitative murder, supposedly remaking Alfred Hitchcock's Psycho for the skidrow moviegoers. Not entirely the case, but otherwise hinted as the film's two halves definitely divides the film's focus.

The first part of the film has four girls out on the road for some R&R and the occasional skinny-dipping, but after their car breaks down that night, they have no choice but to accept a generous offer held out to them by a seemingly good Samaritan living in a nearby farm with his father. Anyone who'd seen Psycho can easily tell these girls are doomed and true enough, someone goes knife crazy on one of them whilst soaking in a tub (a rather lame variation to our beloved shower scene), all before shooting and decapitating the rest of them.

As morning comes, Billy (this film's take on Norman's character and the one responsible for bringing the girls in for tonight) soon discovers (or rather told by his father) that he have murdered his guests, apparently an issue he is suffering from ever since his mum died. Dad promises he'll cover up the crime but asks Billy to leave for a while, fearing he might do more murder.

But is Billy really crazy? This little nick of originality places Three on a Meathook on a fair spot as a watchable yet ineptly early take on the backwoods and cannibal slasher sub-genre, beating both The Texas Chainsaw Massacre and United Kingdom's little gem Frightmare by at least a year. As far as the mystery goes, not only is the killer's conveniently obscured from our viewing, but hints are given that Pa might not be all up there as well, especially if his pride and joy happens to be the family's homemade sausages (Hmm, I wonder if the film's title is any indication for this...), giving us enough of a red herring to keep watching and guessing who's who is really crazy and chopping up women into smithereens.

Some fun stuff from the first half but after the massacre, Girdler's direction had us slowly walking through cheap hammy montages of Billy walking down streets, trying to get drunk but ends up lucky instead when his non-sober arse gets picked up (and cleaned. Yeah you heard me. Cleaned) by a willing waitress, who he later meet in her bed the morning after. No grainy grit or bad acting could even elevate these moments from being mind-draining boring, and it really felt like forever before we discover the family's twisted secrets and some revelations that we never saw coming. Nevertheless, Three on a Meathook picked up some fascinating ends by then, so it's not a total lost after what appears to be an eternity of nothing.

I could consider this movie as the kind of rental you could pass through unless you have nothing better to do. It's not the best example of a well made pre-Texas Chainsaw Massacre slasher flick, but it's far from unwatchable on its own thanks to, at least, some interesting set-up.