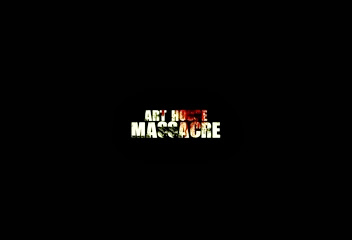 I didn't know what to expect from a film titled "Art House Massacre" but I had my guesses, one of which I fear that it's something like that dreadfully mind-fucked German Chainsaw Massacre. (For the record, I was approaching it with a different mindset so I guess the blame's on me for that one) Good thing though, as it turns out upon seeing it, Art House Massacre is far from the psychedelic splatter/art film hybrid that I was avoiding, though it doesn't quite live up to the massacre part either.

Troubled over the loss of her unborn child a year ago, modeler Liz Richards returns for a shoot in hopes of moving forward past the incident. Her new shoot just so happens to be located in the middle of nowhere in the country side, in a house preoccupied by a lonesome photographer (and self-proclaimed artist), which was all fine until she noticed the eyeless body in the bathroom. Panicked, Liz is soon captured and held captive, learning that the photographer is actually a deranged psychopath who runs an operation where he uses blood to paint his masterpieces.

Now, as far as I can tell at this point, the film may sound like a standard slasher plot, and while it does have its moments, it's really anything but the old road.

Art House Massacre would eventually evolve into more of a low key police procedural thriller as Liz's husband receives her phone call for help and tries his best to locate his wife with the little clues she'd left. I do praise this change of tone and style but, sadly, I didn't find it all that engaging thanks to some dodgy acting and lengthy interval. The low budget often shows its sad rear in the film's editing and filming location, which mostly shifts in between Liz in a basement and her husband outside in either a field or in their home city; we also never get to see any of the more gruesome stuff due to quick cut-aways that tamed down the film. I do believe the sole focus of the film was more on creating suspense over sticky, visceral eye-candy, but it has a tendency to get a bit lost within its own story telling and ends up a bit draggy.

However, it still has its passable pros; In terms of flow and direction, Art House Massacre kept a realistic tone and very few horror flicks actually make it work that way, so that's a few pointers up. Horror elements are played straight despite the lack of strong bloody scenes, featuring a generally twisted plot point, hence not a total lost for massacre fans. Just a tad shame we never looked deeper into our killer's background, on how he began and pulled off his operations, but it did brought up some neat twists somewhere in the climax that uncovered another reason for his killings.

Likewise, it's hard to even consider this a slasher due to its lack of anything that makes a stalk-and-kill flickie save the last ten minutes or so, but open horror fans could give this one a run. Not the best the sub-genre could offer, but for a quick overnight viewing, Art House Massacre is a passable effort.

Bodycount:
1 female stabbed on the eye with scalpel
1 male hacked on the head with axe
1 male bludgeoned with a torch
1 female had organs surgically removed, dismembered with chainsaw
1 male hacked with axe
1 male shot on the head with nailgun
1 male bludgeoned to death with sledgehammer
1 male had his head beaten with sledgehammer
Total: 8
Posted by Kaijinu at 8:25 AM