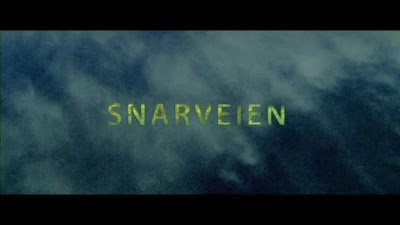 While the film itself is polished, the story of Snarveien is anything except new.

This Scandinavian thriller-cum-slasher had a couple on a road trip across the border to buy some wedding supplies for a friend. When driving back home later that evening, a roadblock forces the two to take a detour that a policeman showed them earlier, unknowingly leading to the backwoods and encountering a wounded panicking girl.

She appears to be fleeing from something, or someone, so the two do-gooders attempt to find help, meeting up with the cop again who helps them settle in a nearby house in the woods. Obviously, the occupants of this house ain't normal and soon a fight for survival is at hand.

It's really no more than another thriller that tackles snuff films, Snarveien had it made with some cheap but passable tension, good stalker action and a crisp high-quality look. But everything else seems to drag down to mediocrity as slasher/thriller clichés piles up so quickly in front of us, with twists and surprises that we all saw coming right beforehand.

It's a shame, really; the direction was good and the film felt realistic enough with its attention to details and continuity, but everything about this film seems so predictable that they could have done something to hype it up. Sadly, the kill count is pretty low and uncreative, the survivor count is remarkable high (for a film with only two leads!), the killers committing them look rather lame (dudes in gimp masks with miniature head-cams) and everything happened so fast, the 70 minute running time of the movie just seem to breezed through as if nothing happened. (kinda did for a hardcore slasher fan)

Not necessarily a bad movie, just replaceable. You can watch up to ten other titles out there that tries to exploit snuff movies as a horror subject in place for this one and have at least an interesting time, so unless you got nothing much to do and just want to pass the time, Snarveien might stand as a last option.

Bodycount:
1 female killed with hunting knife
1 male hacked on the neck with axe
1 male shot
1 female impaled on a fire poke
1 male shot on the head
Total: 5
Posted by Kaijinu at 1:40 PM