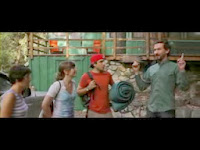 A horror title released by Finite Films, a series of short films made under the constraints suggested by audiences, Forest Falls runs a twenty some minute story of a group of teenagers renting out a cabin for a fun week, only for them to discover someone they knew isn't who they appear to be and they're being picked off one by one by a masked intruder later that night.

Impressively creepy with a good build-up, the short has everything a good slasher film is supposed to have, including some fairly acceptable casts with modest acting, a grindhouse atmosphere, tension filled scares, and a menacing looking killer. 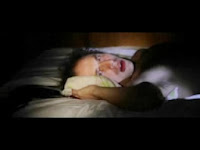 The film showcased a rare variation of a typical slasher film trope, mainly the fact that the killer here prefers to use a gun with a silencer rather than a bladed weapon or a blunt object. An atypical choice, but works none the less considering how well the direction is. The twists are done in a way of total ambiguity as it could have been anyone behind the killer's mask and with no clear indication to why they're doing all this, their complete silence during his killing spree is no short of unnerving. 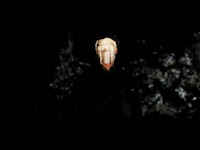 Despite some cues from dead teenager flicks, the film is not overly exploitive considering its tameness and as long as the story is worthily creepy, I can overlook a slasher flick's lack of T&A and gore anytime. With what little the crew had to work with, both budget and in concept as a part of its production's gimmick, I find Forest Fall a passable project made just to entertain.

Open horror or slasher fans alike who can appreciate a good flow, be sure to check out this when you have the time. It's worth a good viewing.