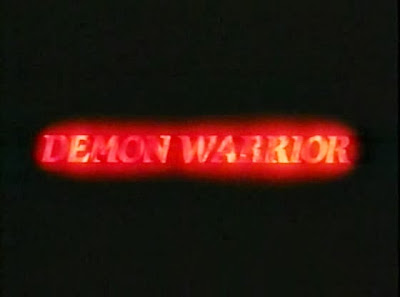 Mostly supernatural in tone, the most notable gems under this slasher sub-type are the 1983 slow-burner gore-fest Scalps and the low-brow but effectively atmospheric 1982 The Ghost Dance; interestingly, both are completely in contrast with one another in terms of direction and gore level but each were special in their own rights. Others do exists but didn't quite get as much audience recognition as the two aforementioned titles, such as this late 80s entry Demon Warrior, a title so obscure, I had to look for it in the deepest bowels of cyberspace and risked my computer of a virus attack.

A group of five friends venture out to the middle of a Texan woods wherein the locals try to avoid as they believe it is jinxed with a death curse that, for every ten years, a Demon Warrior for every will appear with a mission to murder anyone it can grab hold on.  As routine, none of these peeps believe the story and they took advantage of the isolation caused by this superstition to have the entire place for themselves and party. of course, they eventually find out that the curse is real as a demon-headed killer does show up with murder in its mind.

So, with a particularly basic plot point like this, I had to keep my expectations low. Unfortunately, even at that level of mindset, Demon Warrior failed to bring out anything entirely worthwhile for my viewing; although done with a fair budget, the film was never anywhere as exciting or as gruesome as the likes of, let's say, Scalps, perhaps the only Native American horror flick to embrace the slasher formula by heart. The film lacks any effective flow or tone, being too quick in its pacing to either fully develop its characters or let them wallow in their near-isolated state to help settle some effective atmosphere.

Aside from the direction, another aspect that killed any rule of suspense was that the culprit was revealed too soon, monster head, loin cloth and all, offing a few random bypassers who just happens to be at the wrong place at the wrong time. I admit though that I like the killer's cheap but inventive design, but it never have a true menacing presence to make the film anymore memorable, which I blame on the its uninspired and gore-lite killing spree. (As a bit of a spoiler, he got rid off quite easily, too. Not to reveal much but it involves some Native American juju)

Still, I can't dismiss this as a bad film, just uninspired. When you hit it on a right time, Demon Warrior can be a passable dreck with an easy to digest story that checks away everything we know and possibly love in a slasher movie; to think, though, with a sizable budget they would at least hype up the gore or weld out a more effective script to make up with its lack of originality, but I guess we can't have everything done right.

A nearly forgotten but purely rentable piece of post-80s horror; nothing to boast, nothing to fear, deserves a look whenever you can find it.