I Know What You Did Last: Bloody Homecoming (2012) 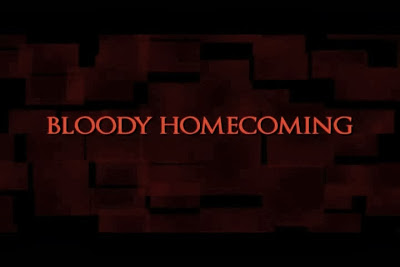 Tributes to the Golden Age of Slasher films have been tossed around lately; new age cult favorites such as the Hatchet series, The Sleeper (2009) and recent releases like Don't Go To The Reunion and Murder University are just few of the hundreds made every year under this claim and now Bloody Homecoming will try to join their ranks.

It starts with a group of freshmen on their way to their school's Homecoming Dance when another group bullies them into leaving. Thinking they don't need a real dance to have a good time, the chaps and their dates instead crash a nearby faculty building with hope of nailing some tonight. Unfortunately, one of them got too frisky with his girl, forcing his date to knock him out and lock him in the room in retaliation. Once said horny teen comes through, however, he tries to get out but as he does, a nearby candle drops, setting the whole room ablaze. By the time his friends and some school staff noticed, it was too late and the boy was cooked to death.

Moving on three years later, then-freshmen are now seniors and while most of them are trying to forget the past and move from the incident, someone clearly hasn't. Bloody notes and death threats are soon found on the lockers owned by some of these teens, prompting cops and school personnel alike to try and find out who's behind it. In the meantime, the school continues to prepare and hold the first Homecoming Dance since the accident. Of course, blood-written letters aren't enough to hold these teens from the dance and soon, the guilty ones find themselves under the mercy of a fireman-suited maniac with a sharp spear baton.

Taking a lot of cues from campus slashers from both the 80s and the 90s, Bloody Homecoming comes close as a callback to those years when teens are nubile yet likable, murders are simple yet deliciously bloody, and slasher plots had done a lot to make itself interesting all the while sticking to the rules. The story may not be entirely original as echoes of Prom Night, House of Sorority Row, My Bloody Valentine and even I Know What You Did Last Summer makes a definite ring on a lot of scenes here, the sub-genre was never really known for straying too far from their structure so those who love a good homage to the Golden Age of slashers can truly appreciate this effort.

Production-wise, Bloody Homecoming has a few moments when the film's meager budget does show; while slasher films were never the place to look for high-class acting, the casts here play their roles with varying degree of wooden that it comes off kinda distracting. Not to mention the celebrated Homecoming dances look awfully under-attended. (Some parents must have been worried that something like a vengeance-fueled massacre would happen...) Still, it's not like this is anything we never seen before in a low-budget B-flick so it's a minor daft from my point of view so long as the film still delivers the goods.

It takes a little while before the big night happens, giving us a little more time to know our cast and actually get to care for some of them, a ploy to give the killings later a bit more impact. The murders themselves are restrained to simple stabbings and impalements but it's bloody enough to fully satisfy. The killer behind them also pulled off a rather unique get-up with an equally unusual choice of murder weapon; I was expecting an axe to go with that fireman suit but a spear baton does come off more obscure, thus workable! And after all the steady-paced hack-and slashing, the film even gives us a neat twist reveal that I never saw coming, something that we never get often nowadays.

Some may hate it, but the simplicity of the plot is what drives Bloody Homecoming to a level of acceptability from my end. I could say that it needed more blood, or kill count, but you can't have everything and I'm just thankful to had seen a fair work from people who really know their genre.