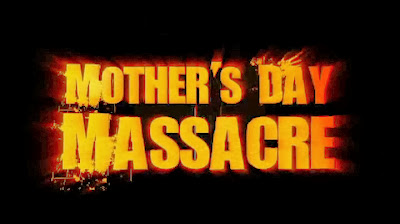 Strange is definitely the word I'm looking for right now whenever I see this. May it be the good or the bad kind, however, is debatable.

Mother's Day Massacre opens with a woman confronting a white trash mother in her home, demanding to see a man who may be responsible for something horrendous done to her. In a fit of rage, she accidentally knocked a pan full of boiling bacon oil over one of the mum's babies and ends up bludgeoned to death with the same frying pan in manic motherly revenge.

Moving forward to the present, the story shifts to one awkward teenager named Jim being urged by his girlfriend (?) to take a road trip with their buds as they try to score some weed. By the time they get to their secret stash, however, they instead ran afoul with a pair of mentally challenged and completely homicidal brothers who waste no time slaughtering them. What soon follows is something rather different, but it will eventually lead up to a revelation that ties these horrific events and bloodshed together, and questions who will live and die.

In a nutshell, Mother's Day Massacre is an unusual and incoherent mayhem of a piece that mixes slashers with a bit of weird drama and teen angst. In fact, it never felt like a straight slasher in most of its running time, but rather more of a tragic teen story that's drenched in blood.

The pros, however, are that it tries to break some of the norms of a slasher movie which makes it unpredictable and kinda original. Those you wanted to die or live may not live through your expectations (a questionable move depending on your taste), the direction shifting focus on one character to the next, making you wonder where all of this is going to lead to as a story. It's still far from tame, of course, with the murders fair in count and albeit not entirely gory, savage enough to please our crowd. Plus, the finale is a definite must see, as it is bound to leave mouths agape and questioning what the heck just happened, or if this is really all to it?

Acting is quite good and the production value looks surprisingly well despite the B-Movie quality budget. There's no denying it's still the same low-budget trash we often get in independently made horror flicks, but it has a bit of style in its grit and some diamonds in its roughs, so despite its shortcomings, I stand appreciating the lurid and strange work that is Mother's Day Massacre, a title that is a tad misleading, too weird on its own and exploitative all throughout.