After School Theatrics of Doom: The Clown At Midnight (1999) 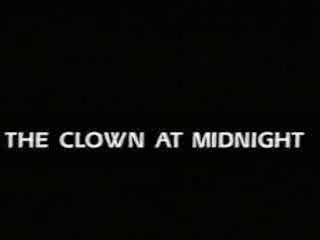 My history with The Clown at Midnight didn't start out quite well; first seeing the film during my transition from high school to college, my need for gore and fast paced horror turned me off upon seeing it. I was young(er) and a tad picky, thus I left the film alone for almost 5 years. Now, just to see if my years of experience as a slasher fanatic may have improve my judgment, I decided to see it again and figure out why I disliked it before; the thing is, not only did I saw very little that is wrong from the film, I also came to enjoy it! (So I guess I was just a noob then?)

Troubled teenager Kate and six of her classmates and friends are assigned by their drama teacher to help out in renovating an old run-down and donated theatre which closed down years ago after some bad publicity involving a murdered opera star. Said victim just so happened to be Kate's mother too, so she's understandably uneasy.

Things turn stranger and deadlier however when, while doing some of the clean-up the next day, someone in a full clown get-up is seen skulking around and begins to murder the students one at a time. It soon becomes apparent that whoever snuffed Kate's mum back then is still around and he's up to his old murderous ways again.

Perhaps what makes The Clown at Midnight a slight drag is that it offers nothing new to the sub-genre; the plot is paper thin with the basics, from paint-by-number murders that are the least inventive to a cast of stereotyped single-dimensional teens who do the obliviously cliched. (Although one of them says he'll try not to. We could give that poor shmuck some credit) The only variation they put to this set-up is that our lead somehow acquired the gift of preternatural sight and starts seeing visions of her mother's murder. This eventually leads to a sort-of mystery on who the killer might be but it's never that fully fleshed out, instead focusing on the killer clown attack.

Still, on a right mind set, The Clown at Midnight isn't all that bad; while the cast are stereotyped, most of them are likable enough to at least feel bad for when they die. This is perhaps because, as mentioned in the above paragraph, some of them were trying to be different; we got a gay guy here that actually puts up a fight with the killer, a jock that is picked on this peer (including his own girlfriend!) and one bad-ass rebel who turns out to be a movie aficionado who even goes as far as quoting Lon Chaney's infamous "clown at midnight" bit. While not being hunted down by a guy in face-paint, these kids even thrown in some quippy moments and dialogues to give us a few chuckles. Its these little surprises that at least made the film bearable and have its moments, as well as giving us a cathartic feel once the killing starts.

The titular clown is a mixed egg for me; while he does try to be creepy by looming around in the shadows before murdering them, he doesn't have much of an impact in his presence. Perhaps this is because he acts more like a straight-forward slasher villain that lashes out at his victims the moment he sees them rather than the kind that teases and jerks around, build some good suspense and creep factor. Could be just me, though, but he also looked very plain.

The Clown at Midnight may not be the biggest when it comes to plotting and twisting its story for something entirely new and exciting, but its a fair effort and passable entertainment for all slasher fans. If you like your slasher simple and not too overly gory, and yet still delivers, let this be your opera.

Bodycount:
1 female knifed repeatedly in the chest
1 female had her head hacked with an axe
1 female strangled with a necklace
1 female stabbed through a wall in the back and out the chest with a spear
1 male electrocuted with severed live-wire through a metal chair
1 male falls off roof of the theater
1 female decapitated with axe
1 male pushed off catwalk, falls to his death
1 male dropped through trap door and impaled onto spearheads