Welcome, boys and girls, to another entry of 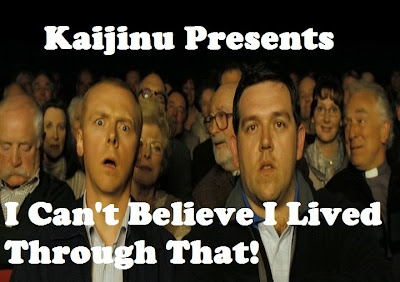 We open the film with a note telling the story of Mr. Mason and how he murdered his family.

After this typo-filled opening text, next thing we'll see is a crowd of people talking in muffled audio for a lengthy while until we suddenly shift our attention to some dude in a bad checkered shirt, brandishing a hatchet. He enters a house and murders a old man living there, thus giving us our first kill.

So far, nothing makes sense and it gets worse when we finally get to see our title card, a cheap edit over a footage of African American teens dancing to hip-hop music and telling "Yo Mama" jokes, the latter being the only entertaining thing about this movie...

After what seems like an eternity of an opening sequences, we found out that two random folks from that crowd scene is actually one of our main casts (or something). They're planning to go to the woods for some R&R along with some buds (the usual gig in these films) and it is no surprise that the cabin they're renting happens to be the same one Mr. Mason murdered most of his family. Of course, like any other films in this fair subgenre, someone who we all could assume as Mr. Mason's demented son Harry returns to the very same house to avenge his family's deaths.

Now, this doesn't make any sense; why would Harry avenge his family's death if his father was the one who killed them? I mean, was he gonna dig up his pappy's grave and wrestle with a limp corpse while wailing around in anger? Or are we to expect two boogeymen to grapple with one another? No, not exactly. What we do have is a typical mute killer who does nothing but sneer angrily at the camera and look kinda handicapped. Up there. In the head.

What soon follows is the usual backwoods slasher shtick of a madman in the woods slaughtering teens for no God damn reason, except it's ten times worse than the worst slasher film imaginable (Mine was "Don't Go in to the Woods...Alone!" If there's gonna be a film worse than that, it's this); editing was done with cheap effects, the kills are atrociously silly (one guy's murder was implied with wiggling glasses. Next thing we see, he's dead. What the fuck?).

As far as the story goes, it is plain flat and nauseatingly horrid due to the production's very faulty audio, and the cast's badly acted and written script. (It's so bad that I can't tell if these guys are even trying to make a movie, or are they just playing around with a camera) One scene had a guy trip down on a twig whilst running for dear life and utter out "I've fallen, and I can't get up" (a fave line for those who are powerful enough to withstand the film's stupidity), and another had some group of scurrying teens, after finding a car, goes on for almost an entire minute or two wondering what to do with it (It's a fucking car! Get on it and drive your ass off to safety!)

Now I don't know about you but if these scenes has to mean anything to me, it's probably gonna sound something like: "Okay, dude, you could either run through the whole shit like a loyal, slasher completist that you are, earning a reputation as the most obsessed Filipino horror fanatic, or just watch the review made by the so-called "Cinema Snob" and rip a few things there, just to save yourself from a nasty headache and purchasing an entire canister of Tylenol, and hope no one would notice the plagiarism."

I could had gotten with the latter, but meh, I just had to be the goody-two-shoes that I am today and see the entire film just for the experience. Hence my lost for words on describing how bad this movie is and a good reason to keep this as short and quick as possible.

I've seen a lot of shitty films, and some even lower than shit (I dunno what's lower than that, but I imagine it'll be very angry and has many tiny legs), but this just took the whole buffet! It fails not only as a slasher film, a horror movie, or even just a plain movie, but it fails as entertainment itself! If I want to see blaxploitation flick, I think I would rather see bad films like Black Devil Doll or even Holla over this cuz at least those titles knew how to make a story worthwhile. Here, there is no story, there is no scares, there is no laughs, just silly people pretending to be actors in a zero-budget movie that the only ones I could imagine enjoying the shit out of this crud are those who're smoking high on prescription drugs and Fanta. Why on Earth would anyone would even think of distributing this is beyond my understanding, but at least I lived through it and I'm ready to move on...