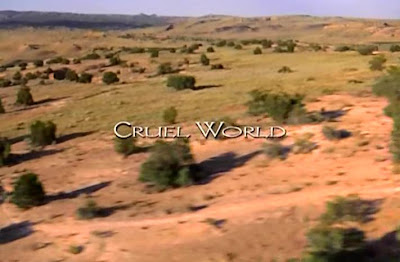 Some time ago, Reality TV gets a fairly disturbing twist in the horror genre after the success of dead teenager flicks around the 90s and a bit in the early 2000s with a Canada released title known as My Little Eye. The film pits a group of teenagers participating in what they believe to be a Reality TV show where the only rule is to stay in the house to win some cold hard cash. Unknown to them, the show was just a ruse to have them ripe for a bloody picking as one by one, they all fall victim to some fairly gruesome murders.

Many other titles such as House of 9 (2004) and Series 7 (2001) soon follow this idea, but Cruel World tried this approach a tad too late as around its release, tame teen slasher flicks were sortah dying and slowly being replaced by gorier releases such as SAW (2003), House of 1000 Corpses (2003) and even the underrated 2005 House of Wax remake. 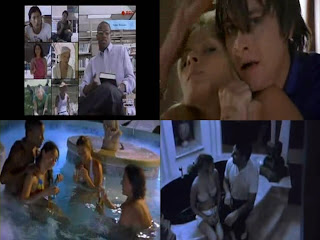 Terminator 2: Judgement Day (1991)'s Edward Furlong stars as the lead antagonist Phillip, a Reality TV reject who didn't take his leave all too well and plots bloody vengeance against those who were responsible as he stalk and murders a young starlet and anybody unfortunate enough to be in the way. After disposing the bodies, he takes full control over the house (which is supposed to be the set of a new Reality show hosted by the late starlet) and begins his own twisted take on the show by pitting its occupants in a series of bizarre games. Those who survive gets to stay and await for the next (and often more grueling) challenge, while those who are "sent home" bites the big one.

While the premise does sounds promising, some of the execution could use a lot of work; for starters, the entire concept of the Reality show Furlong's character is running isn't all that exciting. It's simply one strange game to the next, with very little of the cast noticing how odd they are or notice the fact there's no visible crew. (Save Phillip's mentally challenged brother) It actually took them long enough to finally realize how dire their predicament is and most (if not all) of those who noticed it sooner are already dead, leaving us with some of the dumbest victims in the face of Reality TV and/or teen slashers. 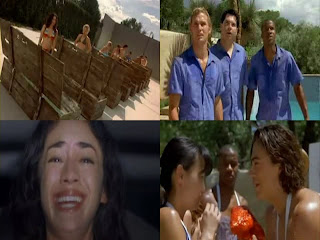 ﻿
With that being the point, the entire film runs a steady routine of challenge-lose-kill-talk and it wears out any sense of dread or tension, bringing out instead the hammiest villain acting you can have in cheap celluloid. In fact, Furlong may have gained the physique of a believable loser who's out for blood via a strong will to manipulate anyone to kill each other, but that ain't enough to make a character seriously menacing if all he does is sit behind a computer gorging junkfood and emptying beer cans. He's twisted but too clumsy and inexperienced to do enough fieldwork to even qualify him as a slasher killer (at least after his teen victims came in that is) but thankfully we got his brother doing the sidelines for him in the hack-and-slash department, that is if the big guy can set aside some personal (and childish) issues.

Murders and gore effects are limited to tame killings such as live burials, hangings and standard stabbings, and plot holes are ever present with some of the characters fate left undetermined. (One girl gets chased and locked up in a barn, and we never get to see her again) Plus the actual games themselves were hardly imaginative, so if you're gonna spend a good time waiting for something memorable or at least shocking to come up after, do not bother! The budget restrains have spoken and not even the film's third act can save it from being a bit dull! 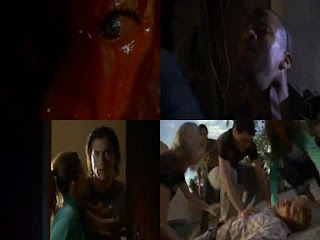 I don't know whether this is to make a practical point on how silly the concept of reality TV is but Cruel World failed to do anything to mark an impact. The casts are boring, the murders are almost bloodless and the duo of homicidal brothers, with reasons for being psychotic hardly even qualifies to be understandable, are anything but scary. Still, I can't say I hated it, just expected a bit more excitement coming from this.

I guess you could say I enjoyed it because of how easily digestible this movie is and how I can simply pass this as a time waster that you can rent whenever it hits you right, but I can name plenty more films you can see over this that had the same plot point. Better ones. 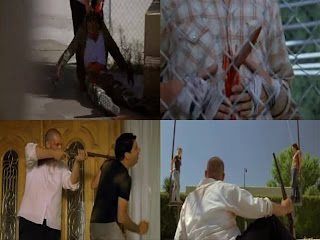 But if you're curious to see what John Conner looks like years after Terminator 2, what Jaime Pressly did before she went ahead to do TV in My Name is Earl, or is easily impressed by cheap B-Movies, then I guess Cruel World can be your poison. Just don't go crying on us if you hated it...