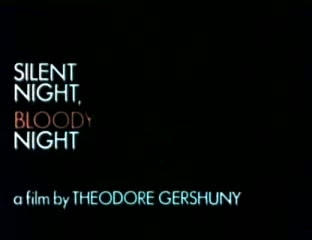 Criminally under-appreciated, this public domain proto-slasher might be one of the few titles to be actually ahead of its time.

Opening in one winter morning in the 1950s, a man is set ablaze outside his mansion one Christmas Eve. The man's only living benefactor, his grandson, returns to town twenty years later in hopes of selling the place, but not before talking to the town's council with his lawyer. What he didn't know is that the townsfolk are desperate on demolishing the mansion, hoping to keep a deadly secret buried forever; this proves to be more difficult done as an escaped mental patient had recently escaped and somehow find recluse in the abode.

Everything is not what it seems as plot twists and reveals shows more to this slasher than just your average doomed-teens-killed-by-psycho routine. The plot is engaging as it is interesting, taking a swing at some of the usual elements found in most 80s-released slashers such as the killer's motive sounding like an average revenge plot. Once the story and secrets slowly begin to unravel, though, it is then we begin spending a good time guessing what comes next and who is really killing all those who step inside the seemingly cursed mansion.

The direction can be a bit slow for that matter, but the cheap production sometimes has its charm; low-light shots of the snowy mansion bring out its menacing nature, adding a macabre touch to the slayings. One scene actually has us watching a flashback sequence involving mental patients taking revenge on their doctors for locking them up; the entire scene is tinted and very gritty, thus a workable attempt for some tension. Red herrings do their part pretty well, although some of the acting could use some work. The climax can be a headscratcher as well, but once you fully understood what's going on, it does make sense albeit being a little improbable.

Silent Night, Bloody Night certainly showcased a lot of unsung pros for a proto-slasher over its own low-budget flaws, thus it still makes me wonder why it's so underrated. The film is a great side dish for any Holiday horror marathon, especially if you could get to watch it as a double bill with Bob Clark's Black Christmas (1974). It's a bit complicated, slowly burning its way to a reveal that works on a certain level, but for all its axing, creepy phone-calling and twisty flow, it's a must-see or must-have for all slasher fans!

Bodycount:
1 male burned to death
1 dog stabbed with a pocket knife
1 male and 1 female hacked to death with an axe
1 male bludgeoned with shovel
1 elderly female hacked with axe
1 elderly male had his hands cut off, hit by a car
1 male gets a broken bottle to the eye, killed (flashback)
2 males and 4 females murdered offscreen (flashback)
1 male shot
1 male shot with shotgun
1 male shot to death
Total: 17
Posted by Kaijinu at 6:35 PM