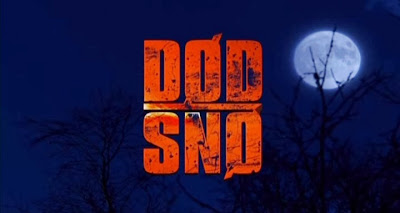 Opening shot: A random girl being chased and disemboweled by a bunch of undead SS soldiers. Typical zombie film? Not quite.

The next scene brings us back to a familiar slasher backdrop: a group of seven teenagers rents a cabin in the woods for some rest and relaxation, being warned on their way there by a random camper with a story about around a tirade of Nazis that once tormented and stole loot from a nearby town before meeting their demise when the townsfolk wrecked vengeance upon them. They say those who survived the uprising froze to death up in very mountains these kid were driving to and whoever takes their cursed loot is doomed for death.

Of course, the tale turns out to the be true as random Nazi zombies are then seen popping out of the snow, with bayonets at hand, ready to disembowel and mutilate anyone that come across their path, which unfortunately will include our hapless teens after they found the zombie's chest full of cursed jewels and stuff.

Dead Snow is a well worthy addition to the zombie fandom, but as one of those zombie films that isn't entirely all "zombie". A good reason for this is that the villains here do not kill to feed and too the fact that they seem to die off quite easily from fatal damages as if they're still alive. Countless times we also have victims here being bitten by one of these dead boys and they barely turned; I could say it might have something to do with them cauterizing the wound but we can never be sure for these kind of films.

So instead of a typical shambling and cannibalizing zombie flick, what we have here rather is a slasher film with reanimated Nazi as the main baddie; at that point, Dead Snow wins for bringing something different for both horror sub-genres and too being a fun one at that.

As a horror comedy, it took a stab at satirizing zombie film clichés from Night of the Living Dead to splatter classics like The Evil Dead and Braindead; this including witty dialogues that hails straight from the Post-Scream slasher era and splatstick antics that spells out gory fun in a Three Stooges sort of fashion, the kind of nonsensical exploitation that's made to be loved by hardcore low-budget splatter fans and co. It actually starts out sort-of straight, giving us some time to know our victims and flesh them out enough to be cared about; thrown in some decent scares and jolt moments, and the film manages to set us in a misleading start. Once the kids starts talking about movie trivia and horny beckoning for outhouse sex (foreshadowing how silly this is gonna become), the gorno comic settles in as the classic slasher "no-no" of splitting up gets committed and what remains of the group are left to fight for their lives against the undead.

And fight they did! While some of them did have a struggle through the woods as they're hunted down by these zombies, one particular scene will staple to the minds of viewers everywhere: two dudes, armed with no more than a chainsaw, a hatchet and a sledgehammer, goes ape on every Nazi dead that charges against them while the Norwegian song Min Dag plays ala montage. It's savory brutal and gory all through out, a tribute to the badassery that is two nerds killing zombies with powertools, done before by other nerdy heroes like Lionel from Braindead and Ashley J. Williams of the Evil Dead franchise. (Okay, maybe not so much of a nerd in Ash's case, but he was sort of a wuss on the first film...)

Dead Snow may not be the most original in its premise, but it sure know how to hold it together and give us a film worthy of our time. Sure, it could have spend a good amount of time building up the background behind these Nazis and to how they are up there as the undead in the first place, but why try to be serious if awesome grue and gags work without an apology? Yes sir, if brainless gory fun is what you need to warm up in a snowy evening, or to see with your friends in a booze run, then thaw out this movie and play it hard!