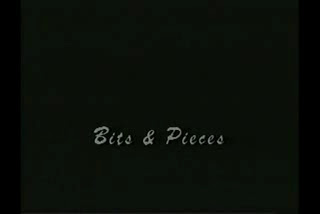 Sometimes its hard being a slasher fan; not only there are chances of being pelted away from society for your choice of entertainment, there's also the threat of running into something so mind-meltingly boring just to satisfy your cravings and you'll find yourself wasting a sizable time of your life with that crap instead of doing something productive like go outside, party, sleep after a long day's work, or bake a pie. (My case was with the pie. Long story there...)

A fine example of a movie that you should try to avoid in risk of trashing a portion of your life is Bits and Pieces, a story of a man, a woman and another psychopath with mommy issues. Said psycho's been kidnapping and torturing women before dismembering their bodies for the cops to find, but when he unknowingly left a witness alive, a detective swears to protect said witness and starts a romantic fling with her after, oh, I dunno, a few frames on screen?

Still, will he be enough protection for our witness against a killer who may just be around the corner? If you're brave enough to watch it and find out, be my guest.

Technically a mix of all things we would expect to two or three slashers a year, Bits and Pieces felt more like a drawn out attempt to do a serious horror movie done by someone who just got out of film school. Probably from the cheaper ones. The film is so horribly acted, scripted and directed that it's quite impossible to even consider this memorable. There's no levity whatsoever to make us feel connected to any of these characters, thus leaves me wondering who in the right mind would even distribute this in video? Okay, trashy horror fanatics might get a kick out of it, but for the rest of us? Bull-shivism!

Horrible lighting, bad scoring, a villain that's as threatening as a crippled angry cat slowly making its way to you ten feet away, there's nothing I can find to praise for in this film, or take note of save perhaps (and I'm gonna be quoting this from my bud, Hud) using it as a mean to straighten those in Guantanamo's Detention Camp ala torture.


That's all I could say. If I needed to say more, I'll tell you all about it once I wake up from my much needed sleep...