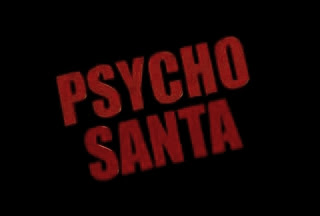 Eversince Billy wore the Santa suit and grabbed that axe in Silent Night Deadly Night, the notoriety of having one of your lovable childhood figures turned deadly with much sleaze and grit had became a staple sub-type for the slasher sub-genre. Some recreation worked, with the likes of Santa Slay, Finland's Rare Export and the Dutch entry Sint proved to be a worthy addition, and then there's the suicide inducing ineptness like Satan Claws.

Now, here we have Psycho Santa, an early 2000 entry to the ever growing tirade of ho-ho-homicidal jolly fat men; told in a series of flashbacks by an ordinary guy to his girlfriend as they drive to a Christmas party, the movie follows a chronologically jumbled story about a deformed man who, after a home invasion attempt by two robbers unknowingly released him from his captivity, goes to a killing spree in the woods and any nearby houses while dressed up as Santa Claus. It's a plot-less movie for that matter, feeling more like a collection of murder scenes with varying level of bloodshed and workability, as the low-budget trappings of the film shows from time to time.

What it does, however, is make its direction go well with the film's lack of proper budget; nothing most of you can relate to but the way the film narrates itself felt a lot like that of someone sharing a good urban legend and passing it off to a friend as something true. I'm a sucker to those kinds of stories so there's a bit of personal taste thrown into this. Sadly, this could have been pulled off a lot better if they got a bigger budget for the murder scenes as they are the only thing holding this film together.

The killer Santa looks a bit plain, the kills are mostly done off-camera, and a lot of padding was been done to pull the running time a little higher. Everything else is standard zero-budget mediocrity, so unless you have some amount of patience or you find movies like this bearable, I find Psycho Santa a hard film to recommend. You can see it if you like, just expect the worse...