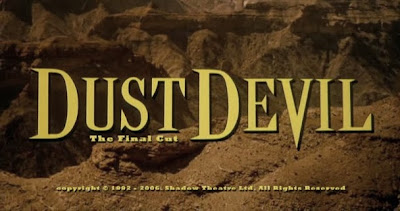 (Note: this review is based on the longer and nearly unedited "Final Cut". Such swag.) 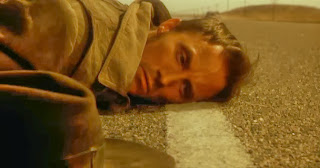 "Back in the first times, in the time of the red light, Desert Wind was a man like us. Until by mischance, he grew wings and flew like a bird. He became a hunter, and like a hawk, he flew to seek his prey. Taking refuge in those far corners of the world where magic still lingers. But having once been a man, so does he still suffer the passions of a man, flying in the rages sometimes, and throwing himself down like a child, to vent his wrath upon the earth. The people of the great Namib have another name for those violent winds that blow from nowhere. They call them Dust Devils"

Under the scorching sun in a Namibian desert, a lone traveler hitchhikes his way into a traveling woman's house for a passionate tryst. What first appears to be a one-night stand later turns deadly as the traveler snaps his partner's neck. Slaughtering her body further, the man who calls himself a "Dust Devil" paints religious mysticism all over the interior of the house with the woman's blood before finally setting it on fire.

As he does this deed, a mysterious phone call somehow connected his actions to the life of two separate individuals; one is Sgt. Ben Mukurob, a tired detective who's been living a life under the memory of his late son, while the other is Wendy Robinson, a wife in Johannesburg living with a man who is accusing her of cheating. The next morning had Mukurob sent in to investigate the fire while Wendy sets out on a road trip away from her suffocating life; Mukurob finds that there is a possibility that he has a serial killing type on his hands with an apparent obsession with witchcraft, forcing him to try and look into old world magic as a mean to capture whoever was responsible.

All the while, Wendy crosses path with the Dust Devil, seeing him as a harmless hitchhiker. Though a magical feat got her nervous of his company at first, she eventually warms up to him in an infatuated state, not knowing what he really is. The investigation, and too the Dust Devil's revelation of his supposed goal, would eventually tie these two roads together in one final conflict between sane and insane, the rational and the mystic.
Visually powerful and atmospherically overwhelming, Richard Stanley of HARDWARE: M.A.R.K.-13 (1990) and The Island of Dr. Moreau (1996) fame directs his second horror feature Dust Devil with more focus on tone over gory substance, making it one of the finer underrated horror films of its time. Post-production, however, had left the film in a state of development hell which resulted in multiple cuts and editing upon US release with rather sizable number of inconsistencies in the plot. It wasn't until a few years of self-financing later that this "Final Cut" came to be, a stimulating heavy mixture of a serial killer thriller, a crime drama, slasher film violence and supernatural horror that leaves us either wanting more or needing to understand due to its underlying themes of nihilism, wanting, violence triggered by racism and sexism, and belief.

If I could describe the film as anything else, I would add that it's a South African take on a Western; exploiting everything that dwells and happens under the sun, made more haunting by the wide openness of the Namib desert and its savage nature, particularly using the theme of sandstorms to back-up the killer's supposed supernatural state. A lot of giallo-inspired imagery and cinematography really help the movie's hauntingly impressive visuals, particularly wide eye aerial shots and dream sequences tinted in nauseatingly candied color. A very (and I mean very) impressively haunting score by none other than Britain's own Simon Boswell was also thrown into the fray, a spellbinding hybrid of ethnicity and Gregorian tune that just breathes class.

Apart from that, the heavy use of characterization also gives this film more depth that most horror films in particular; Chelsea Field brought out much plight for her character Wendy, tempting us to pity her despite some unlikable traits. We also then have Zakes Mokae as Ben Mukurob, the more interesting second lead whose performance goes so well with the character's backstory and personality, a mix between a hard-boiled detective and a depressed family man. Others include John Matshikiza as a mystic living in a new age and too the film's narrator, giving an air of magic and power whenever he's around, and of course, John Burke as the Dust Devil, a rather charming face to suit what should be an equally charming serial killer, giving a bit of mystery and untold danger to the role, preying on the spiritually weak and longing.
As much as I want to call it flawless, Dust Devil still suffers a few (and tiny) bumps along the way; while some might find the film's dual plot focus to be an acceptable albeit complicated attempt to bring out something more in a horror film, not all will find this enjoyable as it sometimes strays away (or back) its focus unexpectedly. Some people might find the deep symbolism here confusing, which might somehow explain why this thinking man's horror isn't all that well-known to our crowd. In a technical sense, there's also the matter of bad dubbing and/or uneven acting of some of the lesser casts.

Those expecting a B-grade slasher movie from this needs to look elsewhere, as Dust Devil (1992) tries to be anything but that, and in a certain level, it worked! While there is a few count of violence, they're not overly brutal (Save for one. You'll know what it is when you see it), but the overall result sure makes up a lot for it, giving us one of the most unsung horror film in all it's hypnotic glory.