A Snowy Holiday in: The Horrible House on the Hill (1974) 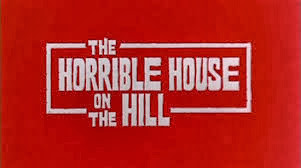 What could be better on a cold holiday night than to spend a few times with your friends and family inside a cozy cabin? Well, definitely not one, not two, but five evil kids!

Survivors of a (oddly sped-up) car crash while being transported to a kid's psychiatric ward, five insane tykes came out unscathed and venture to the next available house they can find, which just so happens to be owned by three vacationing wealthy couples and their manservant. While at first unamused by their arrival, the adults let them stay until they figure out what to do, leading to some grisly murders perpetrated by the killer kiddies who only wanted to "play" with them.

A precursor to killer kid slasher films, which in turn influenced by earlier deadly tyke films like The Bad Seed  (1956) and Village of the Damned (1960), The Horrible House on the Hill (Also known for famously as Devil Times Five) is a sleazier and more outrageous stab at the sub-genre, overloaded with gimmicky horrors and cheesy banter.

A deeply appreciated script is one element that makes The Horrible House far from horrible, giving life to each of its characters with much variety and witty humor to keep them interesting. Such highlights will include a random cat-fight by two biddies who happens to be mum and daughter, and the fact that these adults can't seem to notice how odd some of these "accidents" are until it's too late. The killer kids are also given their own unique personalities, from an innocent little doll-loving girl and a pre-teen pretending to be a nun, to pyromaniacs, soldier wannabes and a cross-dressing boy who can't get over being beaten in chess.

And with unique personalities comes unique kills, coming in imaginatively with death by piranhas and a machete-armed swingset, but some of them did come off rather odd as they're drawn out with a slow-mo gimmick, one of them being as long as over four minutes! Said kill was the kid's first victim, which involve them clubbing him to death with sledgehammers, chains and shovels, all done in a sepia tint. It's a minor set-back, as forty minutes into the movie, the film finally get its momentum and flows quite smoothly with the killings. To add the obscure tone to this film is its groovy 70s scoring that comes in quite odd with its semi-serious tone.

As an exploitation film, The Horrible House is a fun and fair movie that's made for the enjoyment for those who can stomach a really bad film, one that will include dumber-than-usual adults and cheesy killer kiddies. It's not all perfect, nor will it ever be as it hardly felt serious with its taboo subject of murderous children, but for its own sake of entertainment, the movie delivers with flair and atmosphere that only the true lovers of the obscure can appreciate. A must see for all true slasher fans, and too followers of killer kid movies!

Bodycount:
1 male and 1 female mangled in car crash
1 male beaten to death
1 male garroted and hanged on an thin wire noose
1 male hacked on the neck with a hatchet
1 female drowned in bathtub whilst eaten alive by piranhas
1 male impaled on a machete
1 female set ablaze
1 female speared on the neck
1 male had his throat cut with razor
Total: 10
Posted by Kaijinu at 7:41 PM