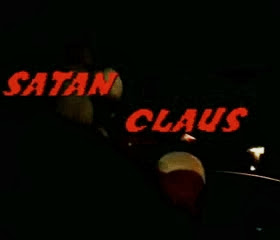 *sigh*...Let me just push my woodchipper into my room and warm it up before I do this thing.

With holidays come holiday viewings and, like any kind of film genre, there will always gonna be the trashy ones. Slasher films have a few set of their own bad holiday flicks and this is one of them. 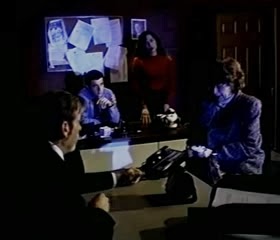 A psycho in a Santa get-up is on a chopping spree as he cuts off body parts from various people with an axe. One of the victims, unfortunately, happens to be the wife of the city's chief of police, thus in a sense of a personal vendetta, Bad Santa is on the top of the naughty list for the police department.

In between the continued axing and our Santa harassing the police by calling them, failed actor Steve and his lady friend Sandra gets involved with the case when Claus kills the Sandra's boyfriend. They decided to try out their luck and find a way to stop the killer, despite the warnings of Steve's mum that Santa might be Satan himself. The whole Santa/Satan analysis again. If only this film had done this a little better...
I can't tell whatever possessed the distributors to release this film as it's nothing but total crap for me; the lighting is some of the worst I've seen in a horror film, as bad as those early VHS copies of Prom Night (1980) where you can't even tell what's happening in that film's hallway chase scene with those dark backgrounds. Same can be said here in the majority of its night scenes, which is very annoying as you can't make out what's happening and most of Santa's killing spree happens at the dark. 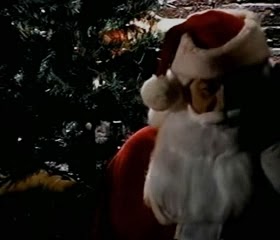 Acting is amateurish and the effects looked like they're something you can buy at a gasoline stop during Halloween, hence no horror element from this film works. As an unintentional comedy? You might get more luck out of that, however, but not for me. Never for me. Especially if they try to pass everything here so seriously it's not funny anymore. 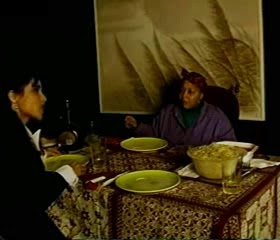 The worst comes with the film's so-called twist ending; I'll spoil this for you all but the killer turns out to be a woman from the police department. Whether it's black magic or whatever shit they're pulling out for this, but we just spent an entire 70-80 minute running watching some fat dude kill his way through random bypassers with an axe, and now you tell us it was a woman? And what was the black magic for anyway? Was it killing for the sake of killing for Satan or what?

Screw this, I know how to turn off my brain to ooze in some cheesy fun but there's a limit to how dumb and cheesy one film can be. This is nothing but a bad film for bad film lovers, and while I have my share of those films, this one isn't gonna be one of them. Trash It!

*throws DVD into the woodchipper and dances on the remains*