Backwoods Christmas with a Pirate?: The Christmas Season Massacre (2001) 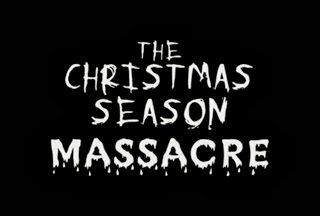 Some time ago, a poor kid nicknamed One-shoe Magroo vows vengeance on some local bullies for stealing one pair or the shoes he got for Christmas. And true enough, this pirate obsessed "pussy" (Their words, not mine!) is now killing off each and every one of his classmates that was ever mean to him, which includes some dude with a weird food fetish and have sex while wearing a large papier-mâché watermelon over his head.
So now, what remains of One-shoe's classmates decided to band up together and haul up in a cabin in the middle of the woods in hopes of overpowering One-shoe once he gets to them. A good plan. Well, a great plan actually! If only they  did stick together and let none of them off their sights, but being the idiots that they are, they didn't. Hence, one at a time, Magroo gets to kill them off eventually, forcing whoever left breathing to defend themselves in the most idiotic ways possible.

As you can tell, this is one of this films that are not meant to be taken seriously and I'm cool with that so long as the jokes work and the movie doesn't try to drag itself much. Unfortunately, it did the opposite of both, with low-brow humour that felt forced and uninspired, and a lot of padding that eats away a good amount of running time that could have been used for something worthwhile. No character is likeable as almost everyone of them are either as dim as a hollowed rock (if that is possible) or cheekily overacted, which includes the killer himself, looking way too silly even for a bad film.

Come to think about it, why is it this is called The Christmas Season Massacre if very little of everything here had anything to do with Christmas? I mean, yeah, Oneshoe's backstory involves the holiday, but I'm sure anybody who look into this title would expect something very Christmassy, right? I dunno, all I can tell that this movie did good was the gore; it's cheap, but least it was good eye candy once everything else on screen fails. Then there's that gratuitous breast massage scene, done away while some dude over the radio talks about bread dough.
Despite the Christmas themed title, this is barely a film that you can watch for a holiday viewing. Slasher fans who are into cheese and low-brow humour of the odd kind might want to try this out, but for me, I think I rather see Terror at Bloodfart Lake again than go for another minute of this.