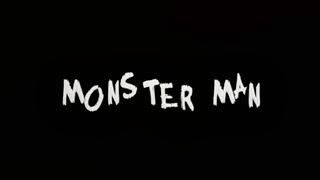 Adam (the Wuss) and Harley (The Jerk) are two college mates on a road trip to a wedding where a girl Adam likes is the bride. After stopping by in a local diner for a quick beer or two, Harley dim-wittedly tries to piss off the redneck population in said stop, inevitably leading them to be stalked by someone riding what seems to be a monster truck, dragging along a sexy hitchhiker into the mess as they find out that whoever is riding this truck might be involved with the series of missing limbs and bizarre Satanic cult murders.

Not really sure where this film got me, but I'm thinking it's the monster truck. Not that I enjoy watching derbies featuring cars with giant donut-shaped wheels riding through dirt, but rather it's the idea that such vehicle actually exists. So, with a moderate expectation, Monster Man had a good start, reminiscing of teen buddy films like Miss March and American Pie, the two leads were funny with their antics, but the good guy/obnoxious jerk buddy act got tiring all too quickly as routine seems to take it toll.

Apart from failing as a buddy film, Monster Man also fails as a horror flick; given as it may that we do have some gross out scenes and some decent car chases ala Jeepers Creepers opening, any sense of dread and tension is lost due to its hammy nature and lack of any strong gore. Add the feel-good ending and a comical shots of our villain(s) and what we have here, instead, is a sad and sometimes annoying wannabe slasher.

Not a lost cause for a film as it still has its strengths, albeit it's going to be dependent on the viewer's taste on whether they can accept the film's weird sense of humor or not, but for the rest of us hardcore slasher fans, I think it's best not to involve ourselves with this one. See it once and then dump it if you like.

Bodycount:
1 male has his head crushed with a clamp
1 male seen headless
1 male ran over and crushed with a monster truck
1 male seen with a crushed torso
1 male mentioned crashes through windshield, killed
1 female throat cut
Total: 6
Posted by Kaijinu at 7:50 PM