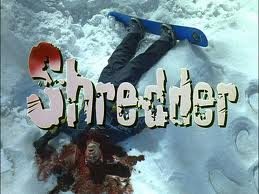 I've said it once and I'll say it again: sometimes, simplicity can be a good thing.

A quite fine example of a very basic slasher flick, Shredder showcases another carload of teenagers out to have some fun on the snow and inside their friend's warm lodge. This, however, might be a short-lived plan as someone dressed as a skier is brutally bumping them off one by one. When their numbers dwindle down too low, the kids are forced to find ways to defend themselves from the masked maniac but who exactly is this killer? And why does this maniac out to get them anyway?

That, my dear readers, is something for the film to know and for us to find out; multiple red herrings did pop up here and there and just as any good mystery goes, some of them gets bumped off unexpectedly. But keep in mind that Shredder isn't going for something smart, but rather aims for something easily digestible.

Taking cues from "dead teen" slasher flicks of the 80s, Shredder relies on hammy scripting, low grade exploitation and bloody murders. It's simplistic plot is designed to dish out these elements with more priority and as far as I'm concerned, I find it a very decent effort; the kills are quite good, varying from the basics to the overly gory. If the film has anything to prove, it is that it can do  snowbound killings with much glee for the red stuff and dark humor, with the killer committing these gruesome acts sporting quite a cool get-up (pun intended) that's mostly made up of a casual winter sporting gear, breathing mask and goggles which sort of reminds me of Harry Warden from My Bloody Valentine (1981).

Outrageous T&A and unusual choices of love-play are among other highlights of the film, and too it's campy tone that didn't dwell in too much on the self-referential quips that most post-Scream slashers of that time have. (Save for one scene involving a virgin victim)

Unfortunately, for those looking for more than "just another slasher", this is where I can't defend the film; being as standard as it is in terms of plotting and build-up, Shredder has very little else to offer in terms of originality as a "dead teen" film. Everything here is predictable, killing off any supposedly scary or intense scenes to the point that it doesn't work too well, and the humor is a hit and miss for those who will find its sheer randomness as unfunny. (Well, not overly random, but there were moments when some of them just felt like that cuz they're so flat)

And yet, I still find these shortcomings to be not as bad as some people put it. It could be perhaps I never really cared much for the supposed jokes and just saw everything as a very hammy and shallow take on the sub-genre. Acting is quite acceptable from its cast (despite most of the characters being annoying morons), the cinematography looks beautiful, and while it does lag in some scenes, the resulting direction is still darkly fun, providing even a random twist that kinda makes sense, if it wasn't so cheesy. Sometimes a fan just couldn't ask for more.

Not the best of its kind to have killers rampaging in the cold snow (I think I'll put Stephen King's The Shining or Norway's Dead Snow in that category), but on its own, Shredder did do good. If you've yet to see it, give it a try and let the bodies hit the snowbank like they're supposed to.