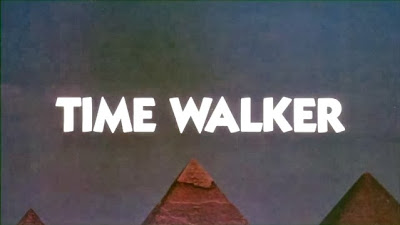 Universal Monsters done ala slasher flick; not entirely new for me if you would consider the number of werewolf "slashers" I've seen like Stephen King's Silver Bullet, wherein the werewolf looked closer to a bear and had enough human monster within to arm itself with a baseball bat. There is also the obscure Night Shadow (1989) where in a drifting serial killer wreck havoc in a small town as a werewolf, uses more than his own claws to murder people. Frankenstein had May (2002), The Invisible Man had Hollow Man, and now we see The Mummy slasherfied in a rather odd way...

Opening with an archeological dig done by a university professor and his students, they find a hidden room with an oddly colored tomb. Shipping the mummy back to their institute, Professor McCadden leads the study, baffled by the body's written origins as stated on the sarcophagus and the mysterious green mold that covers it. Thinking what they have is a find that needs to be shared to the world of science, the mummy was scheduled to be presented via live broadcast, much to the excitement of the dean and pretty much every other staff as it may bring good publicity. But the night before, a late-working student discovers via x-ray that there are hidden gems in the tomb and steals them, planning to make a quick buck on selling each around the campus ground. This, unfortunately, awaken the dormant mummy.

Now in search for the jewels, the bandaged menace stalks every corridor and hallway of the university, looking for the jewels, harming anyone that gets in the way and apparently building something unusually too advanced for an ancient Egyptian. In the meantime, McCadden is forced to answer to how the Mummy disappeared during the grand unveiling and what the green mold is.

Technically, Time Walker isn't a slasher film of the strictest sensibility; molding together scifi and monster elements with slasher film trappings such as POV shots of the monster and lengthy stalkings of nubile teenage victims, the resulting movie was more of a standard B-Grade horror flick that's smothered with enough cheese to choke a rat. If anything else, the so-called mummy here isn't even all that evil either; bandaged up with a weird glowing pendant on his chest, the mummy was later hinted to be something more than human, and judging with its uncanny ability to put together machines, not from our planet either. It kills too, but most of these were more defensive than an actual intended murder, one which involves a flesh-eating mold that was purely accidental.

Cue in a cheesy and very abrupt ending and you may have yourself an oddity of a horror film as it switches from one sub-genre to another, and yet I can't put myself to hate it.

While it may not be much of a slasher flick I was expecting, Time Walker is still a fun B-flick that goes well in a lazy night viewing; it's nostalgic and never boring, packed with a lot of quick scares and very tense moments including the monster entering a victim's home and silently menaced a baby before attacking its babysitter, and another involving a chase across the library, a scene awfully reminiscent of nearly every campus slasher made. Some hammy scripting also made the film an easily digestible dreck despite it's science-y overtone, giving much casual entertainment that's made to provide for our stranger needs.

All in all, Time Walker fails to be a real slasher, but as a monster flick heavily influenced by the sub-genre, I've say it did pretty good for itself. Definitely worth a shot!

Bodycount:
1 male killed offcamera
1 female had her chest and face eaten by mold
1 male had his bones broken after hitting a wall
Total 3