Swimming With The Fishes: Humanoids from the Deep (1980) 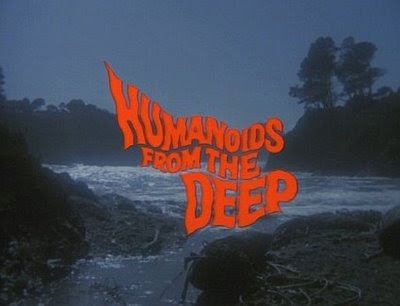 A species of humanoid amphibians starts to surface in a small fishing town, looking for females to mate with and a few others to kill and devour. Since this is the first time the town is seeing these freaks, some sort of explanation is needed, hence comes a trio of concerned citizens, including a fisherman, a bashed Native American, and a scientist who may know something about the mutations. But when the humanoids begin to murder more innocent lives and violently molests buxom girls, could they make it in time to stop these creatures from rampaging at an upcoming Salmon fest?

Thus setting us off to 80 minutes of pure B-flick wonderland full of boobs, blood and men in giant frog suits! Executive produced by Roger Corman, who had handled a fair number of slasher titles before such as Chopping Mall (1986), Stripped To Kill (1987) and Slumber Party Massacre II (1987),  Humanoids from the Deep actually felt more like a sleazier mish-mash of 50s sci-fi monster flick and a little known supernatural slasher flick I like to call The Incubus (1982), hellbent on delighting fright fans with a plot so obscure it's bound to be crazy entertaining!

Good things to come from this film would be it's quick pacing and the pretty insane scenes that go with it, cycling around fish rape, fish kill and, uh, fish monsters so you can bet it's easy to follow. The overall silliness of the dialogue and a hefty number of slimy monster attacks to make the entire movie jarring to sit through if one's not in the mood for hammy monster exploitation and would probably set off the idea that Humanoids' made entirely just to entertain horror fans with a taste for the bizarre, cheesy and bloody. (So those who're into deep stories, character development, emotional twists and whatnot. Seriously? I can understand that if yer looking for general horror, but this is a slasher blog! We worship the cheese, simplistic plotting and bodycount!)

The monsters themselves kinda prove my point of this film's sole purpose to entertain through corniness; they're fish men with long arms, bulging brains and seaweed draped on their backs. I'm pretty sure the production only have three suits because every shot of one whenever its in a rampage looked like as if it's shot from different angles and edited to make it appear as if there's a gaggle of them. That might be far from the truth, all I know if that the big bastards are unintentionally funny, so I'm looking pass their rubbery hide and accept these monsters for the joke that they are. Besides, any kind of monster man enough to rampage through an entire festival celebrating Salmon is bound to earn some respect! Especially if these scenes just so happen to be the very climax of the film.