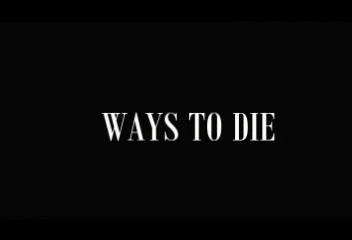 Before seeing this movie, I went through Ryan Nicholson's Star Vehicle, a slasher flick featuring a deranged limo driver slaughtering the cast of a fictional slasher movie out of an obsession with a scream queen. Honestly saying, that movie bombed big time for me thanks to its tedious pacing and overcooked cheese, which is sad to say since I'm a huge fan of the director's first feature film, the psuedo-retro slasher Gutterballs.

With that being said, Famine is Nicholson's next foray into all things stalk-and-slash, revolving around a yearly "famine" held in a university someplace where students lock themselves up in a gym with the rule of no food eaten whatsoever. Coincidentally (or perhaps not), the students participating this year are the same ones involved in a bizzare accident some years ago, when a beloved teacher (named Mr. Balzak...read it. fast.) was left disfigured after a semi-retarded girl accidentally knocked him to a bottle of acid. And on just cue, we got the school mascot, a handyman named Nailer, killing off the students and anybody else in the way apparently out of random. Or is it?

For truth's sake, Famine was never a good movie to begin with; the acting's horrid, the plot's a generic slasher set-up, soundtrack is annoying (at least for me. Not a big fan of heavy metal, guys,) and the pacing of the film really has its slow moments where we have to endure minutes of purposely bad characters doing whatever teens of their age will normally not do. (Such as eat and jerk off in a bathroom. At the same time. gross)

But perhaps on a personal taste, the film has a bad movie charm to it that I can't help but feel drawn to; the mascot killer can be a tad creepy if we are not thinking over how is it managing to run or effectively hold its murder weapons, and their kills are treated with enough of Nicholson's recognizable over-gore to cater for the gore fans. Then there's a slightly good twist in the end; it's not new, but I never seen it coming either.

With a short running time of an hour and 17 minutes, it's a little challenging to sit through Famine since it starts off so slow but once the gore starts, it builds through with growing craziness and violence entertainingly enough to at least pass the time. While this movie did made me question Ryan's directorial abilities, I can always appreciate a good fling when it cones to slasher movies and this one did just okay.