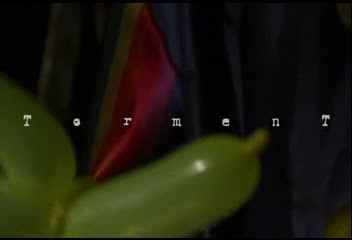 I just wasted a good portion of my life with this one and I blame my love for homicidal clowns.

Meet Dissecto, a masked loonie in a clown mask and get-up who loves capturing people to torture and ultimately kill. Early in the opening, we see him making balloon animals for a bound woman before stabbing her in the neck with a butcher knife, only for him to go on torturing his way through two captured mormons and presumably killing them off screen.

Elsewhere, we follow a man named Ray as he settles a little trip to a remote cabin in hopes of rekindling his relationship with his newly released nut of a girlfriend, Lauren. As far as I could digress this part, it's really nothing I can clamor about; the two characters often argue with each other, making them both hardly likable at all, to the point you just had to wish something, anything would happen to live up the situation.

Problem was, it didn't; from time to time, we see Dissecto torturing someone before inter-cutting to our lovers in troubled paradise, with little effectiveness from both sides.

The torture scenes were tired and uninspired; we get a hand chopped off with a mini guillotine, tooth extracted painfully, some knife stabbings, all prolonged with some unnecessary parlor tricks that our killer clown had to do before the painful stuff happens. I understand this might be for building tension, but there's nothing tense about a thin needle going through a balloon without it popping the damn thing.

By the time our killer finally got to our two lead casts, he easily dispatched the other with a chair (which is the only decent kill we get here) and abduct the other for yet another torture show, prolonged as well with more parlor tricks. This time, however, they thrown in a random cop breaking into Dissecto's hideout just for him to get killed; if this is the filmmaker's definition of a climax, I'm this close to pulling out a flamethrower and burning all the fucking props and film equipment they have just to ensure they wouldn't make another movie. (As for their "creative spirit"? I think my baseball bat can fix that...)

But wait, it gets worse; after another satisfying kill (It's Dissecto. He bit the big one. There, I just saved you 88 minutes of this garbage...), the filmmakers decided to end it with another prolonged scene showing Lauren going crazy and putting on clown make-up. So, coming out fresh from a mental hospital, have a crappy day with your so called boyfriend, watch him get killed, get tortured and kill said torturer will turn you crazy. Oh geez, that's highly fascinating, mate! Did you come up with that on your own? But why do I feel as if I've seen that kind of ending before?

See where I'm going with one?

Torment did make one thing clear; it's tormenting for us, too. The box already had us believing it's going to be a cool slasher of sorts, but the killer on the art looks nothing like the one in the film! Don't buy it, don't rent it, don't borrow it from an unfortunate friend or family member who has it and is trying to get rid of it by passing it to you. Don't even think it exist once you get a glimpse of it; just ignore it, think of of your family and all the minutes you'll be wasting watching this crap. Was that too much? Good. Live with it!

Bodycount:
1 female gets a kitchen knife to the throat
1 male had a hand chopped off with mini-guillotine, killed
1 male had a tooth extracted, killed
1 male had his head crushed with chair
1 male beaten to death with firepoker
1 male knitting needle to the eye
Total: 6
Posted by Kaijinu at 11:39 AM