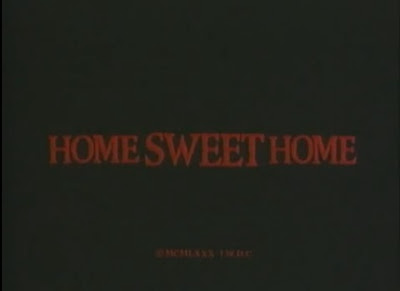 If a movie has a bulky killer and a face-painted wannabe rocker in it, would you really expect it to be good? As in really good? No, and neither did I, but I delved in anyways. So here's my thought on the, apparently, first Thanksgiving slasher ever made.
Or at least I think it's a Thanksgiving slasher...

In the first few minutes, PCP (and, possibly, steroids) injecting, giggling mental patient Jay Jones escaped the loonie bin, killed a good guy offering him beer and ran over an old lady during a red stop light. This badly acted yet attention-grabbing opening gets soon followed by an even more atrociously acted family gathering of nine, which apparently includes a teenage KIZZ member wannabe named "Mistake". (you got that right, movie) Now, what makes this a bit of a joy to watch is that these casts are unbelievably stupid; I mean really, these guys seem to forget a lot of things such as wine, generator fuel and even peas(!), unshockingly giving them a reason to go out and, well, be killed off by Mr. Jones who in turn just happens to have targeted them for his killing spree out of random.

If only we get to enjoy it. I think I did but, uh, I'm still a little fazed from the whole thing, so let me share with you my opinions of this trash flick before my brain melts into fondue.

Home Sweet Home isn't exactly the kind of film where you have to be very smart to enjoy. The way I see it, it's the very definition of a B-flick horror abortion, only funnier depending on how well you can take your cheese coz this movie's full of it. One cliche to another, I've never seen a slasher flick where everything goes wrong in a household and not a single guy or gal goes a little suspicious that the phone, power, fuel and, oh, people seems to be disappearing on them. No, they pretty much go on with their little "thanksgiving party" as if everything's fine, and by the time they finally begin to notice these weird on-goings, they blame it on Mistake. Yes, you heard me, they blame that freak while they're the ones who are not paying much attention that none of the other guys came home yet. Then again, I wouldn't blame them for fabricating a story that would lead to the little shmuck's possible incarceration cuz he's annoying as heck. And I mean annoying. In every possible scene of his.

With zero suspense and scares, and not one character worthy of being likable (not even the killer...), the one thing left for me to check is this film's kills and, well, I wouldn't say they're bad. Just very standard slasher murders only made funny (for me) seeing that they're committed by a bulked-up bodybuilder whose scariest face is synonymous to that of a man experiencing constipation, or that they're executed with some level of strangeness: one guy gets crushed underneath the hood of his jeep and his body's reaction was to pulls its legs up high steadily before limping down, while another pleads the life for his lover in exchange of playing his guitar for the killer. (You know damn well who this one was)

There's no words to define the strangeness this movie have, I'll tell you that; Home Sweet Home lacks the making of a true slasher classic, but if cheese is what you're hungry for, then I'm glad to tell you that I have some goudah left in my fridge, you can have it if you want. Just remember that it might go well with some bread, a couple of brewskies and perhaps this movie. Pop this flick right in your VCR/DVD/Blue-ray/whatever you have hooked-up and running on your TV and just let the corny horror sink in. If it hits you right, you might like what you see. If not, well, may Mistake be with you!

Bodycount:
1 male strangled
1 elderly female hit with car
1 male had his head crushed with car hood
1 male garroted with necklace
1 female slammed her head on a rock
1 female stabbed to death with broken bottle
1 female knifed on the chest
1 male electrocuted on chair
1 male had his throat cut with knife
Total: 9