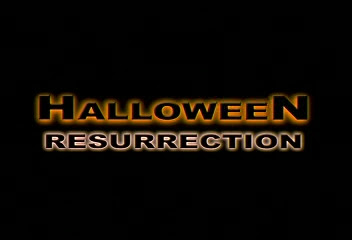 Previously! From THE LIFE AND TIMES OF MICHAEL MYERS!

In an alternate universe where deranged masked killer Michael Myers was been missing 20 years after his massacre in 78', his sister and last intended victim Laurie Strode have been living a disturbed life haunted by the memories of the night he came home until the Halloween of 98, where Michael found her and attempted to finish her off to end his quest of endless vendetta. But in a stroke of luck, Laurie had Michael pinned to the dirt, open to finish him off. Which she did by cutting his block off with an axe.

But as it turns out she didn't decapitate our legendary killer but rather a ruse of a man whose larynx was crushed and forced to wear Michael's suit and mask! So Laurie was traumatized-er and now locked up in a mental hospital where she anticipates her brother's return.

True to her fears, Michael catches up (again) and after a casual stalk and chase, a quick knife to the back sends Laurie (and Jamie Lee Curtis' horror roles) to her death. Now that he got that plot out of the way, Michael's free to go home now, passing his legendary knife to a potential butterball with a passion for serial killers and went on his way.

But it doesn't go too well for him once he finally got back; an internet entrepreneur and host turned The Myers House into a set for his reality TV show where six "lucky" contestants have to stay overnight and try to find the clues to the biggest mystery of all: what makes Michael Myers tick. Not a safe mystery but intriguing nevertheless.

As you can tell, teens and Michael don't mix very well so it isn't too long before The Shape is cutting down the house guests one by one, with millions of internet viewers believing it's all make smoke and mirrors. That being said, you can be as sure as shit these kids and everybody else involved are doomed...

It's not perfect. I admit it. But is it the worse? Hardly!

There isn't much to say about this movie rather than the fact it's just the big guns' attempt to continue a movie with an ending so impossible to follow. It's desperation, frankly, as the flick hardly felt anywhere as serious nor as creepy as the original and its first sequel but in teen slasher sense, this is by far a passable run.

Cheese levels in this one were high with powered tool combat, enough one-liners and witty comebacks to choke a dead Strode, iPad prototypes (were they supposed to come out in 2002?) and the popular "I'm-Alive!" shock ending and the inclusion of rapper Busta Rhymes (and Tyra banks for some reason) as a kung-fu-ing internet host who, fans be cringing, successfully high-kicked Michael out of a window! (I laughed at that scene. More than once) You can tell with all these craziness that this is one junk-fest of a Halloween movie with very little Halloween feel to it at all!

It's probably an overcooked slab of steak that's been turned from side to side over and over again until it dries up into coal but it sure damn as hell entertaining! First, this is probably one of the two entries of the series that actually had the slasher route in full effect and in its simplicity. No tie-ups that limits the film to depend from another for a full explanation and definitely no family drama that everybody seen millions of time on their damn afternoon TVs, Ressurection is plainly pure-to-the-bone slasher antics; masks, teens, bodycount, tits and nothing else. That being said, it's best to enjoy this movie without thinking much of the great big legacy our favorite simple-faced masked killer had and just enjoy this as it is. A slasher flick. Which I did. Hence the rating. Bleh.

It's not scary, nor does it have any sense of respect to the entire Halloween franchise, but Ressurection is as fair as any low-brow slasher flicks made out there. In fact, let's pretend there was no opening murders, let Michael wear a different mask and change his name to Mordecai, and the movie might as well be a title of its own existence. But alas, those with the cash thought it's best to tie in H20, which personally should just ended there, and brought Michael to the world of mediocrity that is B-flicks...