Southern Fried Swampies: The Wild Man of the Navidad (2008) 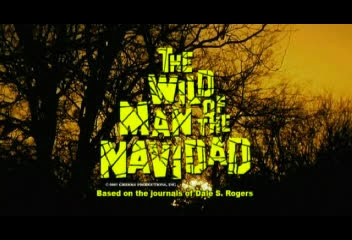 Picture the Southern barrens of Texas Chainsaw Massacre, with the bogs of the creature feature The Legend of Boggy Creek and the bigfoot slaughters of Night of the Demon (1980), and this is probably the closest as I could to describe this deliciously chilling yet sullen homage to the 70s Bigfoot/proto-slasher flicks.

"Based" on the real-life journals of Dale S. Rogers, a man from the 1970s who lived along the banks of the Navidad River in Sublime, Texas, The Wild Man of the Navidad tells a recreated story of the events that lead up to the killings committed by a large hulking beast living in the valley near Rogers' ranch, where Dale opens up for outdoors-men and their family who just wanted to do a few hunting, but gets more than they bargain for when they happen upon the sharpened deer antlers-wielding creature.

Nostalgic horror hunters will love this one; co-produced by Kim Henkle of the original Texas Chainsaw Massacre, Wild Man has all the makings of a cult grindhouse classic in it. Not only does it really feels like a 70s flick, with  the semi-grittiness documentary quality of the picture, and lacking the campiness of the late 80s, but it's also well written and well acted. The film's dialogue are realistically southern, credit worthy since these are real locals on the camera, more to add to the film's authentic vibe and a little proof that low-budget is not always a factor of failure, so long as it's wisely written and handled.

There's a sub-plot of having Dale, seemingly aware of the creature's existence, tries to juggle keeping the pressure of keeping the creature away from harming his catatonic wife by persuading it with skinned rabbits and the fact that his she's seems to be disturbed about something else, that I find quite ingenious and as harrowing as the creature part. All the while, said monster parts had some good grue on them, though can be a little cheap at times, still a fun watch as meat and innards fly around with each maulings, and each kills are fashioned ala slasher film.

The only flaw I see here is that the film's slow-burner approach and some of the dialogue scenes are stretched out that it may bore some viewers, then there's the inevitable bad acting from some parts. Those expecting a large hulking wildman maybe a bit disappointed, as well. Some of the posters had us seeing a large bipedal ape-like creature with tusk to lure in Cryptid fans and the like, but majority of the screen time actually had the titular monster run around in a cloak made up of animal fur, further showing the slasher flick influence of the movie by keeping the monster's real face hidden until the end. (Come to think about it, the fact that the Wild Man wields deer antlers as weapons is also a slasher influence.) It's awfully cheap, but it has its charms.

It's a rare gem that deserves a bit more recognition; cheap and gritty, staying true to the drive-in feels that it attempted to replicate (and worked!), fans of Southern horror will get a hoot, and slasher completists will find a psuedo-retro bigfoot title with a workable story.

My fanart for the film is actually featured in the film's IMDB page, under my deviantart username and described as an "artist rendition of eyewitness account". I didn't put it up in there, but somebody did, four days after I posted it on my Deviantart account and I'm equally flattered that they did. (and they even properly credited it! *phew*) You guys can check out the DA page where this piece was originally posted here.