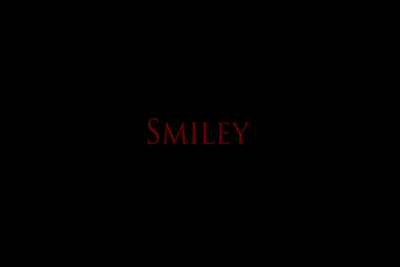 Remember CRY_WOLF (2005)? That teen slasher wannabe that everybody seems to dislike except me? Well, believe it or not, it got a clone for some godforsaken reason. A bad one.

Struggling to move on from her mother's death, bitter and depressed Ashley leaves her family for college only to find herself coming across an urban legend involving a smiley-faced killer who, as rumor has it, will kill any person on the other side of a chatroom site by typing "I did it for the lulz" three times. Believing it as nothing but a load of hogwash and coaxed by a new friend she made, Ashley jokingly typed the words in a chat between a random perv in the web and, shockingly enough, the man gets slaughtered on live cam by a smiley-masked killer. This apparently made the rumors turn in for the worse as soon, people starts disappearing and Ashley begins to see the smiley-faced assailant closing in on her...

And closing in. And closing in. Snd...well, that's all our masked loonie pretty much did. Much like CRY_WOLF, Smiley focuses more doing a psychological slant than actual bodycounting, tackling everything from psyche, troubled pasts and the dark side of ingenuity that is the online community. However, as much as many already tried to use technology as a backdrop for slasher flicks, it's not a very bankable idea unless you know what you're doing and the direction this one is going for lacks proper thrills, scares or creepiness (not to mention the sluggish pacing with very little development), so we're pretty much left with a movie that's a lot to be desired.

So with blood, gore, thrills and even T&A missing, what was left for Smiley in the first place? It's marketed as a slasher but it's really more of a character study centered on an emotionally wrecked girl, who I felt little to care about. Seeing a girl already vulnerable from the get-go only to go deeper into dementia isn't exactly what I call entertainment and, as I've said a dozen times already from my previous reviews, I watch slasher flicks to enjoy an hour and a half (or more) of people dying gruesomely in creative manner, not go through life lessons about surviving college with an emotional half-wit. (Though, I could give her some slack, she did lost her mum) To top it off, the rest of the casts aren't likable either; they're ass wipes who troll one another or just plain douchebags who think they're better and, my friends, I would really rather see these kind of people get mutilated than watch breakdown girl do her thing.

If there's anything I could commend about Smiley, it's the twist ending; I maybe the only guy who's in this, but without spoiling much, let's just say there's a little surprise at the end and I wanted to see what happens after that! The filmmakers at least owe that for making us sit through this wasted opportunity and wasting a cool looking killer like Smiley!

So, am I discouraging you to see Smiley? Actually, no. I may hate it at a point, but if it's something you think you'll enjoy, then go. For me, this game is over and I would rather go through a messy junk like Chain Letter (2009) again than go through watching Madam Freaks-alot and her merry trolls. In fact, I think that's good alternate title for the movie! I call dibs!